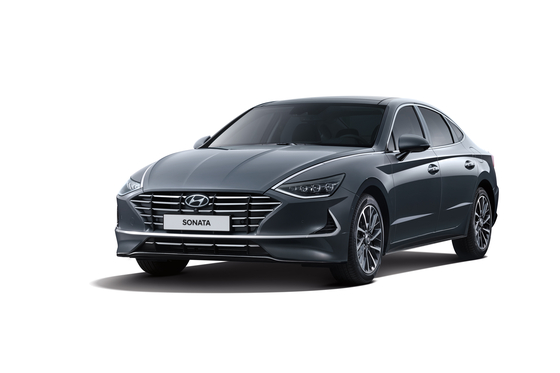 The model, which first launched in 1985, quickly joined Hyundai's bestselling lineup as Koreans' income rose toward the end of 1980s and demand for cars shot up.

The Sonata became the most-sold model in the Hyundai Motor lineup in 2010.

That, however, is not the case anymore.

With the rising popularity of SUVs and luxury sedans, the Sonata, which focuses on practicality and price, is gradually losing its foothold.

In fact, sales have fallen so much that its production plant has been forced to shut down temporarily to control supply.

Hyundai Motor on Monday said that its Asan plant that manufactures the Grandeur large-size sedan and Sonata midsize sedan will suspend operation from March 8 to March 14 as demand falls short of supply.

It is already the second time this year the South Chungcheong factory has shut down due to low demand. It closed between Dec. 23, 2020 and Jan. 6, 2021, hampering the production of some 8,200 units of Sonatas and Grandeurs.

A total of 7,798 Sonatas were sold in Korea this year as of the end of February, a 31.9 percent drop compared to the previous year.

"The shifting trend toward SUVs is the biggest reason behind the dwindling sales of the Sonata," said Kim Pil-soo, an automotive engineering professor at Daelim University.

"Its ambiguous positioning within the Hyundai Motor sedan lineup is another reason."

According to data from the Korea Automobile Manufacturers Association, sales of midsize sedans in Korea dropped 2.5 percent last year to 167,000 units from 171,000 units. Sales of recreational vehicles, which include SUVs and vans, on the other hand, rose by 12 percent.

The segment's worsening performance is also visible at other carmakers.

Sonata's competitive edge over the more expansive Grandeur and smaller Avante was clear in the past: It was relatively cheap while being spacious enough to accommodate a four-member family.

With the launch of luxury brand Genesis, however, Grandeur started to target younger people with lower price tags and trendy design language, absorbing what used to be typical Sonata consumers.

"The polarization of Korea's auto market, which prefers either big and luxurious models or very compact cars, has left Sonata with nowhere to go and that trend is likely continue," said Lee Ho-geun, an automotive engineering professor at Daedeuk University. "Hyundai will have to quickly come up with an upgraded version before it completely loses out to its competitors."

The eighth-generation Sonata launched in 2019 and was partially revamped in March last year.

Yet despite its failing fortunes, experts say the old stalwart is not likely to be discontinued anytime soon.