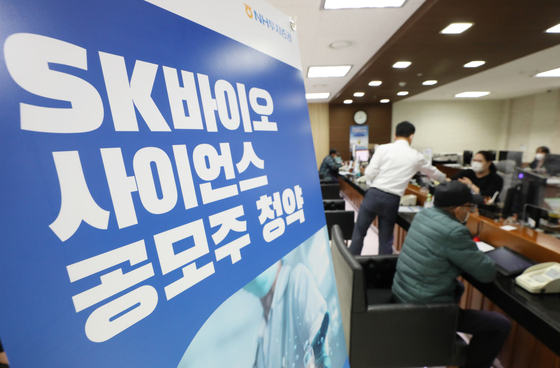 Individual investors place orders for shares in the public offering of SK Bioscience on Wednesday at the Myeong-dong branch of NH Investment & Securities in central Seoul. [NH INVESTMENT & SECURITIES]


SK Bioscience, a vaccine maker that has manufactured coronavirus vaccines, is set to begin trading as a 5-trillion-won ($4.38-billion) company after successfully closing subscriptions for its initial public offering (IPO) Wednesday.

Of the 22.95 million shares going public on the Korea Exchange, some 25 percent, or 5.74 million shares, were allocated to retail investors.

The offering price was 65,000 won a share. In terms of market capitalization, the company will be the number 5 pharmaceutical company in the country after Samsung Biologics, Celltrion, SK Biopharmaceuticals and Shin Poong Pharmaceutical, though it could be ranked higher if the shares perform well. 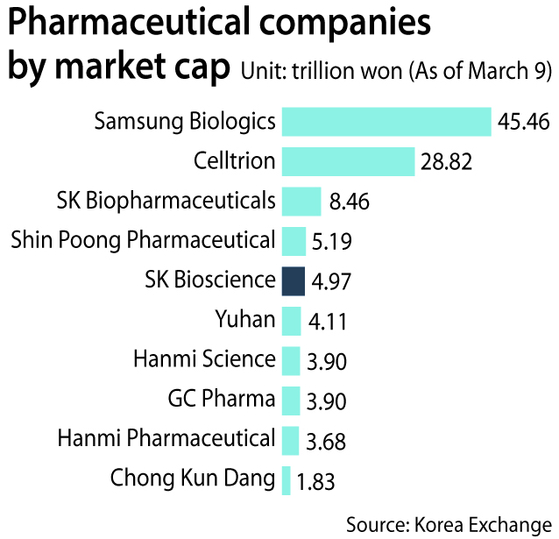 SK Bioscience is set to make its Korea Exchange debut on March 18 and will trade as a Kospi component stock.

The company posted 158.6 billion won in revenue and 26.8 billion won in operating profit in the first three quarters last year, up 33.1 percent and 211.6 percent respectively compared to same period a year earlier. The fourth quarter performance has not been confirmed yet, according to the company.

The new IPO funds will be used for facility investment and research and development projects, according to the company.

Shares were oversubscribed at a rate of 335.36 to 1, though oversubscription in and of itself is not meaningful and is not a good indication of future performance.

Based on the finalized subscription rate, retail investors will receive one share of SK Bioscience for every 10.9 million won on deposit. This also means that 100 million won of deposit will yield only nine shares.

Under the new rules, some half of shares available for retail investors will be allocated in the same amount for all subscribers who deposit a minimum amount, regardless of the amount of the deposits.

This means a retail investor can receive at least one share when making a deposit of 325,000 won for 10 shares. A retail investor who made the minimum deposit at all six underwriters can possibly get at least six shares.

When brokerage houses receive more applications than shares available, they can allocate the shares.

"It is true that SK Bioscience is one of the big-name IPOs of the year that received lots of attention from the public, but it was not certain that the company would exceed Kakao Games in terms of the total amount of deposits," said Hwang Sei-woon, a research fellow at the Korea Capital Market Institute. "As the revised rule increases the retail investor expectations that they could receive at least a share with a small deposit, SK Bioscience was able to break the record and attracted many individual investors."

SK Bioscience might be the last chance for retail investors to apply with multiple accounts as the Financial Services Commission plans to come up with a system that bans the practice in the first half of the year.