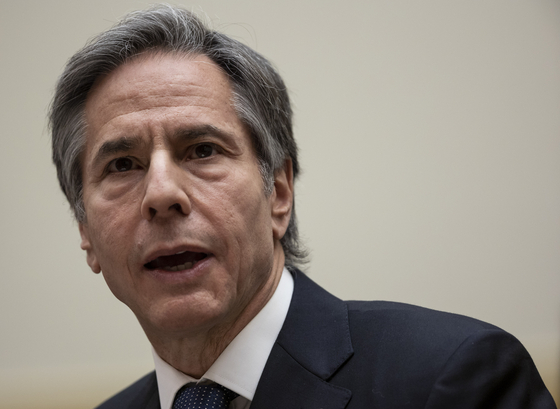 U.S. Secretary of State Antony Blinken speaks before the House Committee on Foreign Affairs on foreign policy priorities in Washington Wednesday, before kicking off an Asia trip that will take him to Tokyo and Seoul next week. [AP/YONHAP]


The United States doesn’t plan on allowing a release of Iran’s frozen assets in Korea until Tehran returns to the 2015 nuclear accord, said U.S. Secretary of State Antony Blinken Wednesday.

Ahead of a trip to Seoul next week, Blinken told the House Foreign Relations Committee that Washington will consider sanctions relief for Tehran -- including the release of Iranian funds frozen in Korean banks -- only if the country “comes back into compliance with its obligations under the nuclear agreement.”

He was asked by a U.S. lawmaker about reports quoting the Korean Ministry of Foreign Affairs saying that billions of dollars locked in Korea will be released to Iran after consultations with the United States.

Blinken replied, “Unless and until Iran comes back into compliance, they won't be getting that relief, and the report you referred to is simply incorrect.”

Tehran has pressing Seoul to unlock assets worth some $7 billion held in the Industrial Bank of Korea and Woori Bank since September 2019, when U.S. sanction waivers for Korea's imports of Iranian oil expired. Korean officials have said that Seoul has been in talks with Washington over sanction waivers for humanitarian purposes to release the Iranian frozen funds.

In May 2018, the Donald Trump administration withdrew from the Joint Comprehensive Plan of Action (JCPOA), signed in July 2015 by Iran, Britain, France, China, Russia, Germany and the United States, under which Tehran agreed to curb its nuclear weapons program in exchange for a lifting of sanctions. Trump's administration re-imposed sweeping sanctions on Tehran, and Iran has been stepping away from the constraints on uranium enrichment and other nuclear activities fixed by the nuclear accord.

On Blinken’s remarks in the House committee, Choi Young-sam, the spokesman for Seoul’s Foreign Ministry, said in a briefing Thursday, “The issue of Iran’s frozen funds in Korea has been continuously discussed with related countries, including the United States, and the international community, and we plan to continue such discussions.”

The Iranian government last month said it reached agreement with Korea to transfer its frozen assets in talks between the head of the Central Bank of Iran and the Korean ambassador to Tehran, although Seoul’s Foreign Ministry cautiously noted that it was too early to draw conclusions as consultations with the United States were still needed.

The Korean government has suggested the use of the Swiss Humanitarian Trade Arrangement, a channel established last year to bring food and medicine to Iran despite U.S. sanctions. However, the transfer of funds to a Swiss account and its use for UN contributions or for purchases of humanitarian items such as medicine and medical equipment is only possible if the United States agrees to sanctions exemptions for Iran.

On such a Swiss channel, a Korean Foreign Ministry official said Thursday, “That issue also goes along with the logic that it is difficult to achieve without the consent of the United States. We have maintained close contact with the U.S. side because the consent process is necessary and will continue to do so in the future.”

In early January, a Korean-flagged oil tanker en route to the United Arab Emirates from Saudi Arabia was seized by Iran's Islamic Revolutionary Guard Corps in the Persian Gulf. While Iranian authorities blamed environmental pollution issues for the ship's seizure, analysts saw the seizure as Iran pressuring Korea over the frozen assets.

Last month, Iran agreed to release all 20 crew members of the vessel with the exception of the captain, though not all sailors have been able to leave because they are needed to operate the ship when it is released. Seoul’s Foreign Ministry said Thursday it is working on the release of the ship separately from the frozen fund matter.

On North Korea policy, Blinken told the House Foreign Relations Committee, “Our approach is something we're also reviewing to make sure we have the best possible tools to advance denuclearization, and in particular, to look at the different pressure points we may have, as well as some of the diplomatic opportunities, so that we can hopefully make progress.”

When asked by Rep. Andy Kim, a Democrat from New Jersey, if it is time to formally declare an end to the 1950-53 Korean War, Blinken replied, “We have to make sure that we are doing everything we can to advance the security of our allies and partners, starting with South Korea, as well as Japan, working toward denuclearization of the Korean Peninsula and, of course, making sure that our own security equities are taken into account.”

He continued that on such a “significant” matter, “the first thing we would need to do is to make an assessment of our own judgment about whether that could advance all the things I just talked about, but of course, to be engaged in very close consultations with our partners, starting with the Republic of Korea.”

Blinken and U.S. Defense Secretary Lloyd Austin will visit Seoul next Wednesday after a three-day trip to Tokyo, announced the two countries’ governments Wednesday, in the first visit by minster-level officials to Korea since the launch of the Biden administration.

Foreign Minister Chung Eui-yong and Defense Minister Suh Wook will host their U.S. counterparts in so-called "two-plus-two" talks, the fifth of their kind, next Thursday, said the foreign and defense ministries in a statement Wednesday. The visit is “expected to strengthen coordination on Korean Peninsula, regional and global issues, and provide an opportunity to further develop the Korea-U.S. alliance.”

Their trips follow Seoul and Washington’s agreement last Sunday on a new defense cost-sharing deal after 18 months of negotiations. Under the new six-year Special Measures Agreement (SMA), Korea will pay 1.1833 trillion won ($1.035 billion) in 2021, a 13.9 percent increase from 2019. Seoul is expected to pay more over the next four years from 2022 to 2025 at a rate that mirrors increases in Seoul’s own defense spending compared to the previous year.

Blinken’s visit also comes as the first Quad virtual summit between the leaders of the United States, Japan, India and Australia is set for Friday.

Seoul officials have said that Korea has not been formally invited to take part in an expanded Quad as the Biden administration has pushed to strengthen the so-called Quadrilateral Dialogue, a security cooperation mechanism between the United States and its three major Indo-Pacific allies, that was established under the former Donald Trump government and seen as a way to contain China.

Foreign Ministry spokesman Choi Thursday did not confirm whether the Quad issue will be included on the agenda during Chung and Blinken’s meeting, but he said that the two sides “will exchange broad and in-depth opinions on areas of common interests, such as the direction of the alliance development.”

The U.S. officials’ visit also comes as Seoul and Tokyo have faced deteriorated bilateral relations over history issues and a related trade spat, and Blinken has been urging greater trilateral cooperation with its closest allies in the region.

The U.S. State Department said in a statement that the visits to Korea and Japan “reaffirm the United States’ commitment to strengthening our alliances" and "highlight cooperation that promotes peace, security, and prosperity in the Indo-Pacific region and around the world.”

It added Blinken and Austin will take part in the two-plus-two meeting in Seoul “to discuss issues of bilateral and global importance.” Blinken will also hold a virtual meeting with Korean youth leaders and host a virtual roundtable with young Korean journalists to discuss the importance of the Korea-U.S. alliance “in promoting peace, security, and prosperity in the Indo-Pacific region and across the globe.”

Immediately after his visit to Seoul, Blinken and U.S. National Security Adviser Jake Sullivan will meet on March 18 in Anchorage, Alaska, with Yang Jiechi, director of China’s Office of the Central Commission for Foreign Affairs, and Wang Yi, the Chinese foreign minister and state councilor. This marks the first high-level meeting between the Biden administration and Chinese officials.