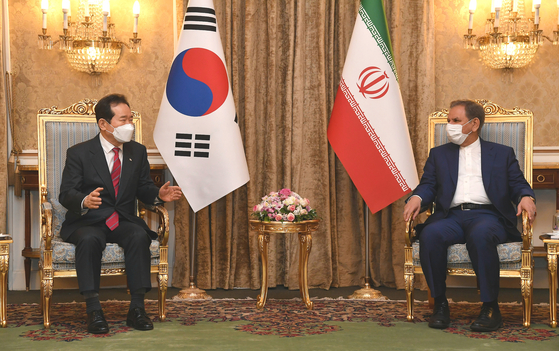 Chung held 90-minute talks with Iranian First Vice President Eshaq Jahangiri Sunday evening as the two sides try to resolve the issue of Iranian frozen assets in Korea due to U.S. sanctions and strengthen bilateral ties strained in recent years due to the matter.

Chung’s trip, the first visit to Iran by a Korean prime minister in 44 years, will run through Tuesday.

In a joint press conference with Jahangiri, Chung said that the Korean government is “willing to support the process of a constructive dialogue between the parties on the Iranian nuclear deal,” or the Joint Comprehensive Plan of Action (Jcpoa) of 2015.

He added that Korea wants to strengthen cooperation on the issue of the frozen funds with related countries.

Chung’s remarks in Tehran likewise indicated Seoul’s willingness to try to resolve the frozen fund issue through persuading the United States and the other Jcpoa countries. His visit appears to convey President Moon Jae-in’s strong conviction to resolve the frozen assets issue and restore bilateral ties with Iran.

Tehran has been pressuring Seoul to release Iran’s assets worth some $7 billion held in the Industrial Bank of Korea and Woori Bank since September 2019, when U.S. sanction waivers for Korea's imports of Iranian oil expired.

In May 2018, the Donald Trump administration withdrew from the Jcpoa, signed in July 2015 by Iran, Britain, France, China, Russia, Germany and the United States, under which Tehran agreed to curb its nuclear weapons program in exchange for a lifting of sanctions. Washington then reimposed sanctions on Tehran, and in turn Iran has been moving away from the limits set on enriched uranium under the deal.

The Joe Biden administration has been working to revive the 2015 Iran nuclear deal, though Tehran has voiced its skepticism toward Washington. U.S. and Iranian delegates started indirect talks in Vienna last Tuesday, with the five other Jcpoa countries acting as intermediaries as they push for Tehran to return to the nuclear accord in full compliance. The shuttle diplomacy reportedly started off on a positive note, and nuclear negotiations are set to resume this week.

Jahangiri during talks with Chung expressed “regret” multiple times over the blocked Iranian funds in Korea, urging them to be released.

During the press conference, Jahangiri urged the Korean government to release Iran's monetary assets as soon as possible through “practical” measures, reported Iran’s state-run news agency IRNA, noting that the blocked funds have hurt Seoul’s “prestige and status” in the country.

He noted that Iran and Korea’s cooperation is not just limited to economic ties but are quite comprehensive and complementary.

Jahangiri was quoted as saying, “Unfortunately, during the course of the past three years, South Korea pursued the illegally imposed U.S. sanctions against Iran, which are internationally quite null and void."

Chung during the joint press conference stressed that when the Iranian nuclear accord is revived, bilateral ties, including economic cooperation, between Seoul and Tehran will be “accelerated more than ever before.”

He said that he had “constructive interactions” with Jahangiri on issues of mutual interest and added that the two sides decided to survey where they can cooperate, especially in the campaign against the Covid-19 pandemic.

Just ahead of Chung’s visit, a Korean oil tanker seized since the beginning of the year was released by Iranian authorities after some 95 days.

The Korea-flagged MT Hankuk Chemi left a port near Iran’s Bandar Abbas Friday morning with its Korean captain and 13 other crew members, Seoul’s Foreign Ministry confirmed Friday. The other sailors except the captain had earlier been released by Iran but stayed on to operate the ship for its return trip.

The tanker, which was en route to the United Arab Emirates from Saudi Arabia with 20 crew members, was seized by Iran's Islamic Revolutionary Guard Corps in the Persian Gulf on Jan. 4.

Iran blamed chemical and environmental pollution issues for the ship's seizure, accusations rejected by the operator of the vessel and the Korean government. However, experts saw the ship seizure as backlash over the frozen assets issue, which can only be resolved through Washington’s sanctions waivers.

On the vessel seizure, Chung conveyed in talks with Jahangiri that “freedom of navigation must be guaranteed” and asked to prevent recurrence.

Chung said, "This visit to Tehran shows Korea’s commitment to the development of the two countries’ future-oriented relations,” adding the need to continue holding such high-level exchanges in the future.

After landing in Tehran earlier Sunday afternoon, Chung was greeted by Iranian Minister of Roads and Urban Development Mohammad Eslami.

During his trip, Chung will meet with representatives of Korean companies in Iran, including Samsung Electronics and LG Electronics.

A potential presidential contender for the ruling Democratic Party, Chung is reportedly considering resigning as prime minister soon after his Iran trip.