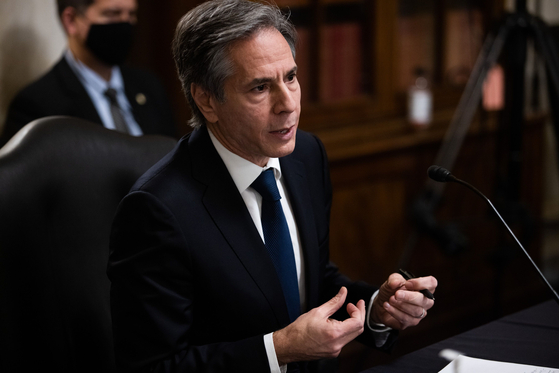 Antony Blinken, who was sworn in as the new U.S. secretary of state on Tuesday, testifies at his confirmation hearing before the Senate Foreign Relations Committee in Washington on Jan. 19. [AFP/YONHAP]

Korean Foreign Minister Kang Kyung-wha and new U.S. Secretary of State Antony Blinken agreed that the North Korean nuclear issue should be treated as an urgent manner under the Joe Biden administration in their first phone call Wednesday.


Kang congratulated Blinken on his confirmation, noting his “deep understanding of South Korea-U.S. relations and the Korean Peninsula issue,” reported Seoul’s Ministry of Foreign Affairs in a statement.

Blinken in turn was said to have expressed his hopes to advance the Korea-U.S. alliance even further during his term.

The two diplomats also “shared an understanding that the North Korean nuclear issue is a matter that should be dealt with urgently under the Biden administration and agreed on close consultation between South Korea and the United States to resolve this issue,” according to the Foreign Ministry.

In addition to discussing bilateral relations, the Korean Peninsula situation and other regional matters, Kang and Blinken also agreed to strengthen their cooperation in tackling global challenges like combating climate change and the Covid-19 pandemic.

President Moon Jae-in recently named Chung Eui-yong, his former director of the Blue House National Security Office who had played a mediator role in the dialogue between Pyongyang and Washington during the Donald Trump administration, as his new foreign minister.

Kang conveyed her hopes that talks between the incoming foreign minister and Blinken could also take place soon.

Blinken in his Senate confirmation hearing last week said the Biden administration will “review the entire approach and policy toward North Korea.”

A longtime adviser to Biden, Blinken, a veteran diplomat, served as deputy national security adviser during the Barack Obama administration from 2013 to 2015 and as deputy secretary of state from 2015 to 2017.

Blinken was sworn in as secretary of state Tuesday by the Senate as the Biden administration pledged to re-engage with allies and focus on multilateralism and coalitions, a turnaround from the "America First" foreign policy of the Trump administration.

Kang and Blinken “affirmed the enduring strength and importance of the U.S.-ROK Alliance, the linchpin of peace, security and prosperity for a free and open Indo-Pacific region and across the world,” the U.S. State Department said in a statement.

Washington also stressed the importance of trilateral cooperation with Tokyo in its readout of Kang and Blinken’s phone call.

Ned Price, a spokesman of the State Department, said that Blinken “highlighted the importance of continued trilateral U.S.-ROK-Japan cooperation, underscored the continued need for the denuclearization of North Korea, and stressed President Biden’s commitment to strengthening U.S. alliances.”

Korea has been working on mending relations with Japan as bilateral relations between the two countries have soured in recent years over history disputes and a trade spat.