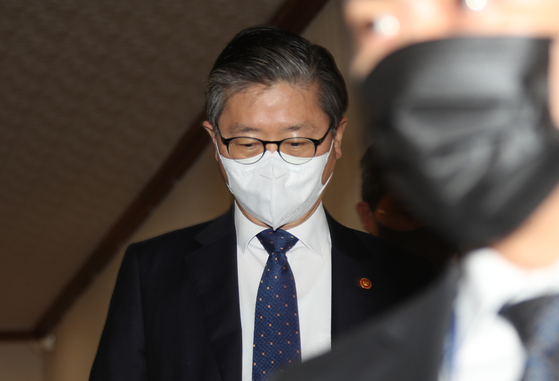 Land Minister Byeon Chang-heum attends a government meeting on the real estate crisis at the government complex in Seoul on Friday. [YONHAP]


Land Minister Byeon Chang-heum has resigned after just three months in office as a snowballing land scandal consumed the state-owned company he had until recently run.

According to the Blue House on Friday, the land minister turned in his resignation to President Moon Jae-in to take responsibility for the recent controversy.

Blue House Senior Secretary for Public Affairs Chung Man-ho said President Moon accepted the resignation but ordered the land minister to finish up basic groundwork on a housing supply plan, including changes to legislation that will fast track development projects.

“Executing the Feb. 4 measures without setback is important,” Chung quoted Moon as saying

The government last month announced a plan to supply 830,000 housing units by 2025.  This includes adding the Gwangmyeong-Siheung area to the list of areas that are to be developed as New Town projects.

Gwangmyeong-Siheung has been the heart of the recent crisis, as two civic groups claimed 13 Korea Land and Housing Corp. (LH) employees bought land on the site using insider information.

Byeon’s resignation came as a surprise. When questioned earlier this week by lawmakers during a National Assembly hearing, the Land Minister said while he would take responsibility he had no intention of resigning.

Pressure on the Land Minister grew as most of the purchases by LH employees were made while he served as the head of the developer.

Byeon is the second Land Minister under the current administration. He took office earlier this year to replace Kim Hyun-mee, who has been accused of further driving up housing prices by limiting supply.