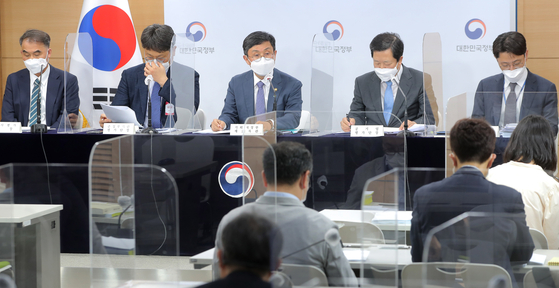 Vice Finance Minister Ahn Do-geol, center, announcing the results of performance evaluation for 131 public companies and institutes at the government complex in Seoul on Friday [YONHAP]


State-owned developer Land and Housing Corp. (LH) saw its evaluation drop sharply compared to last year as it became the center of controversy earlier this year after some of its employees were accused of using insider information for land purchases.

According to the Ministry of Economy and Finance on Friday, the government conducted its management evaluation on 131 public companies and quasi government institutions.

Of those, 23 public companies and quasi-public institutes received the second highest grade, A, accounting for 17.6 percent.

No public company or institution received the highest grade of S. Grade S hasn’t been given to any public agency in the last decade. Korea Airports Corporation was the last to receive an S, in 2011.

Fifty-two companies and institutes received the third highest grade of B, accounting for the largest portion at 39.7 percent.

Thirty-five companies and institutes received a C, at 26.7 percent, while 18 were graded D, or 13.7 percent.

Three companies and institutes failed with an E. Last year there was only one.

While LH did avoid getting the lowest grade, it only received a D. The state-owned company last year in its evaluation received an A.

“LH received a D for its [failure in] ethical management, leadership and organization operation as well as on disaster management,” said Ahn Do-geol, Vice Finance Minister on Friday. “But on business management it received a C.”

Due to receiving the low grade, LH top level officials will not be receiving any bonuses this year.

Even if the employees get bonuses, the amount will shrink significantly, to one-eighth of what they received last year, due to their low grade.

The reason LH employees are still eligible on bonuses is because they received a C on their business management.

“Many committee members that evaluated the public companies and institutions raised serious concerns over LH failing to comply with its responsibility of serving public interest,” Vice Minister Ahn said.

The companies and institutes that received the lowest grade of E were Korea Racing Authority, whose businesses have been affected heavily by Covid-19, Korea Childcare Promotion Institute and Korea Postal Logistics Agency, which was the only institute to receive the lowest grade for two consecutive years.

The government stressed that they applied stricter evaluation on ethical practices this year in particular, which was highlighted with the LH controversy.

It especially worked to reflect employees’ speculative real estate investment as well as so-called gapjil, which is a form of power manipulation against those in weaker positions including businesses that rely on public contracts, as well as possible sexual misconduct.

Along with ethical management evaluation, another factor that played a significant role this year was the public companies and institutions’ contribution toward helping the public fight Covid-19, including employees, some voluntarily, cutting their wages, sharing public burden and providing support including funding for people affected by the pandemic.

The government said it adjusted its evaluation on business performance in consideration of the unprecedented crisis.

The public companies and institutes were also evaluated for their participation in the Moon Jae-in administration policies, particularly the Korean New Deal, made of the Digital New Deal and the Green New Deal.

The eight institutions that received either a D or an E face penalties including the possibility of the heads of the organization being removed as well as cuts in bonuses and limits to their wage increase.

The government proposed the heads of Korea Postal Logistic Agency and Korea Childcare Promotion Institute to be removed as they received the lowest mark.

The same proposal was made to Korea Construction Equipment Safety Institute and Korea Health Promotion Institute as they received a D for two consecutive years.

Although LH was able to narrowly avoid that penalty, as it did not receive a grade E nor was it graded D for two consecutive years, the government earlier this month announced its own separate penalty for the corporation.

The government earlier this month announced a plan to cut 20 percent of LH employees, or some 2,000 people, as part of a larger corporate restructuring plan that included getting rid of some of its current businesses including overseas development projects.

Land Minister Noh Hyeong-ouk on Monday said LH will be restructured to focus only on housing supply and housing welfare.

“Functions monopolizing, overlapping and unnecessary will be spun off,” Noh said.

LH currently employs 9,907, which had increased 20.5 percent since the Moon Jae-in government took office in 2017. When including LH subsidiaries, the total number on the payroll is 11,380.

The government has also decided to freeze the salaries of the top ranking officials for the next three years while cutting employee welfare and business expenses between 10 and 15 percent.