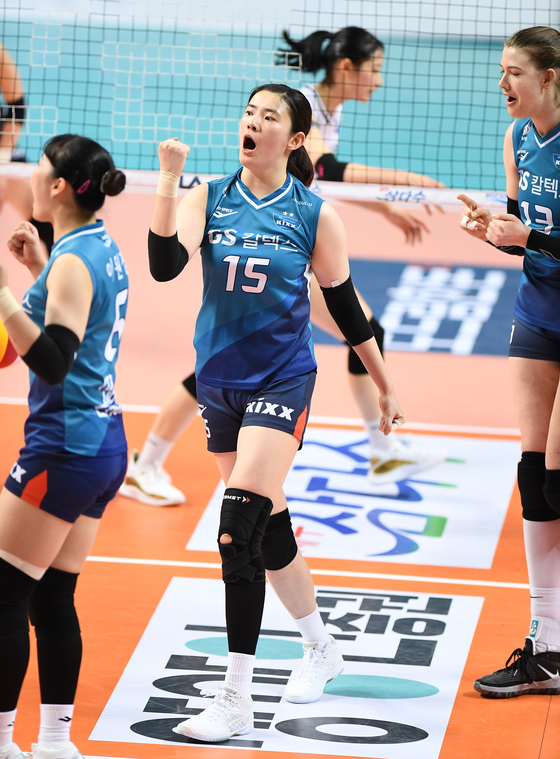 GS Caltex Seoul KIXX center Mun Myeong-hwa reacts to a point during her team's game against the Hwaseong IBK Altos at Jangchung Arena in central Seoul on March 12. [KOVO]


Women's volleyball team GS Caltex Seoul KIXX are the champions of 2021 V league season, taking the title in a stunning come-from-behind victory that saw them tear past favorites Heungkuk Life Insurance Pink Spiders in the final few weeks of the campaign.

The victory was confirmed after the Pink Spiders were defeated by Daejeon KGC, losing three sets to nothing at Chungmu Gymnasium in Daejeon on Saturday.

The Pink Spiders, who have completed all their games, ended with 19 wins, 11 losses, and 56 points, behind GS Caltex with 20 wins, 9 losses and 58 points with one game still to play.

GS will face Daejeon KGC in their final game of the season on Tuesday, but with 20 games as the magic number this season, Tuesday’s game will be nothing more than a victory lap.

Cementing the GS underdog story, it is the first time in 12 years that the Seoul side has topped the table, since the 2008-09 season.

The Pink Spiders were expected to dominate this season with the return of Korean volleyball legend Kim Yeon-koung and the addition of Lee Da-young, joining her twin sister Lee Jae-young on the squad. The Spiders were firmly in the lead until the middle of the season.


However, a series of scandals including injuries and substitutions led to the team seeing both of its star twin players banned and its shot at the trophy quickly disappear.

The Pink Spiders had to win three points in Saturday’s match to return to the lead — even then not guaranteed as GS had a game in hand — but that hope quickly disappeared after losing the first and second sets. After the consecutive losses, Kim did not come onto the court for the third set, staying in the warm-up zone.


The second-ranked Pink Spiders and third-ranked Hwaseong IBK Altos will face each other in the best-of-three playoffs from March 20. The playoff winner will compete in the postseason championship game against GS Caltex on March 26.

GS Caltex have also won the 2020 KOVO Cup, a separate tournament held before the V League begins, giving them a shot at sweeping the Cup, the V League and the playoff title in one year.