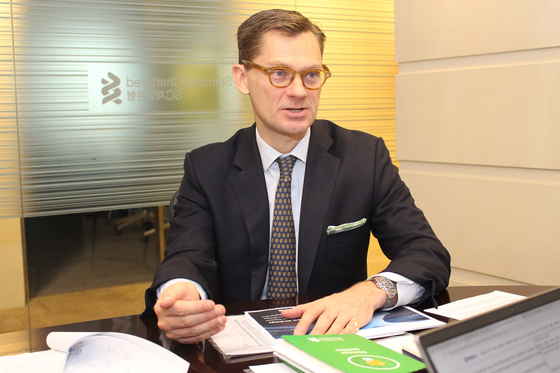 
From crops to copper to crude, commodity prices are on the rise, increasing concern about inflation and a potential interest rate hike that has been off the table for the past year as many governments battle the global health crisis.

S&P GSCI, one of widely recognized benchmarks for investment in commodity markets, closed at 492.22 as of March 12, up more than 60 percent from around 300 in March last year during the first wave of the coronavirus pandemic.

While a boost in commodity prices is usually a sign of economic recovery, Eric Robertsen, Singapore-based head of global research and chief strategist at Standard Chartered Bank, says he expects central banks, including Korea's central bank, to keep their policy rates on hold.

Robertsen, who joined Standard Chartered in 2014 from Millennium Capital Partners in London, had previously held roles in global macro strategy and portfolio management at Deutsche Bank. Currently he's focusing on market research as well as developing investment strategies for major asset classes, including foreign exchange and commodities, at the London-based international bank.

As for the Bank of Korea, he said the bank is likely to maintain current policy rates well into 2022.

He added that he does not expect first rate hike in the United States until 2023. As for China, he said the country is "highly unlikely to raise official policy rates."

The major reason behind the projection is remaining uncertainties related to the coronavirus pandemic, which has lasted longer than most people anticipated.

According to Robertsen, the economic downturn caused by Covid-19 was the worst when compared to the past economic crises, such as the global financial crisis in 2008 or the 1997 Asian financial crisis, in terms of how much the global economy contracted and the speed of contraction.

"But it has also been the fastest recovery," he said. "After the global financial crisis in 2009, it took emerging markets exports two years to recover to pre-crisis levels. In the current crisis, it took two quarters."

The following are the edited excerpts of an interview with Robertsen.


Q. What is driving the rise in commodity prices? Will this trend continue?

Commodity prices are rising for three reasons. First, economic recovery expectations. Secondly, significant monetary and fiscal stimulus, which is lifting fears on inflation and people view commodities as good hedges against inflation. Thirdly, expectations for a significant increase in infrastructure spending, which would lift demand for oil, metals, etc.

This will lift inflation expectations, but it may not lead to actual inflation. The reason is the strength of deflationary forces around the world. Demographics, the increased amount of debt, and the increase in excess savings.


Q. What are the implications for commodities importing countries like Korea?

We have a positive view on commodities though many commodity markets have exceeded our price targets already. We are watching oil closely because for countries like Korea and India, oil is a key import.

If commodity prices are growing, Korea's import costs may go up, but I would imagine this is also happening at a time of increased demand in sectors like shipping where Korea would benefit.

Also, a continued increase in commodity prices will lift inflation expectations, which may increase long-term interest rates, even if the bond markets do not expect the central bank to raise rates.


Q. You forecast inflation in Korea at less than 1 percent in 2021. Is that rate low compared to expected inflation rate in other countries?

We expect inflation in Korea to be in a range of 0 percent to 1 percent in 2021. We expect a similar inflation trajectory for the economies of Taiwan, Thailand and Singapore.

In the United States, we expect the core personal consumption expenditures price index to increase from 1.5 percent to 2.5 percent by mid-year and then settle back towards 2 percent on average for the year.


Q. Expectations are high for economic recovery due to Covid-19 vaccines. Do you think the world's economy can experience a V-shaped recovery?

We believe there will be a surge in global growth data in 2021. This will be due to three factors.

Secondly, there is significant pent-up demand after months of lock-downs and movement restrictions. As economies re-open, the level of demand should be high.

Thirdly, vaccine optimism will create a surge in economic optimism and spending.

But in each of these three cases, the momentum will fall after a period of time. So the recovery may initially look like a V but the sustained pace of growth in say 2022, will start to lose some momentum.

For example, when we look at our global growth projections, we see global gross domestic product in 2021 at 4.8 percent -- 2020 was negative 3.8 percent. But in 2022, we see growth losing some momentum to 4 percent.


Q. Covid-19 still remains a big uncertainty for the world's governments. If there are fourth, fifth, or even sixth round of Covid-19 outbreaks, how will the global macro situation change?

The good news is that as more people are vaccinated, the economic impact of each new round of Covid outbreak should be less and less. We will get to the point where economies are open again. but there are still new infections, even with the existence of the vaccines. It will become like the flu.

The key point economically is that we are getting closer to a point where economies no longer have to completely shut down or impose drastic social movement restrictions.

We remain concerned about two things. First, the uneven pace of vaccine distribution. It is not just emerging markets versus developed markets. There are countries across both emerging and developed markets that are doing very well and there are those who are not.

This uneven gap will also mean that the economic recovery will be very uneven.

Secondly, some Covid-19 variants are showing themselves to be more resilient against the vaccine than others. If we don't achieve herd immunity quickly and in most countries, we will run the future risk of new outbreaks.


Q. There are concerns about bubbles in assets including shares and property. Do you think bubbles have been created in assets around the world?

This gives the impression that asset prices are significantly outpacing underlying fundamentals. Based on low interest rates and excess liquidity and the extremely supportive monetary and fiscal policies around the world, this trend of liquidity going to financial assets looks set to continue.

There may be some markets that look more overvalued than others, but it is difficult to say that all markets are in a bubble. That seems too strong a statement.


Q. Some are worried about inflation recently, as asset prices surge.


Q. If interest rates rise, do we have to be prepared for a sharp decline in asset prices?

One point to make is that in the last year, the amount of outstanding debt in the world increased by roughly $17 trillion, bringing total global debt to nearly $280 trillion. So, all of this debt is dependent on interest rates staying low. If interest rates were to increase significantly, then yes, some financial assets might be vulnerable.

[NEWS IN FOCUS] As China's growth slows, Korea is likely to follow