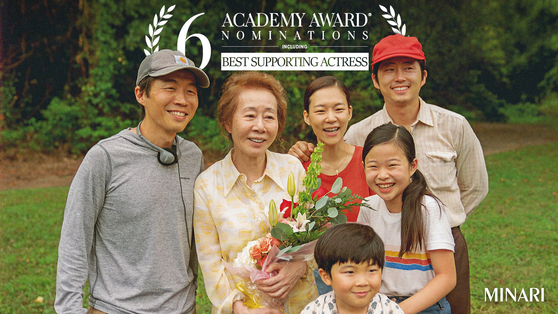 Youn, who returned to Korea on Tuesday from Vancouver, Canada after filming Apple TV series “Pachinko,” immediately went into quarantine, but not before commenting that “she’ll be drinking alone” to celebrate her nomination. She is the fifth Asian actor to receive a nod for the category, following Miyoshi Umeki for "Sayonara" (1957), Shohreh Agdashloo for "House of Sand and Fog" (2003) and Rinko Kikuchi for "Babel" (2007). If she receives the award, she will be the second Asian actor to be recognized in Oscars history after Miyoshi Umeki, and the first Korean actor.

Yeun also became the first Korean American to be nominated in the category.

Although “Minari” is an American film, it’s unsurprising that it touched the hearts of so many local audiences with the semi-autobiographical tale of a Korean immigrant family struggling to achieve the American dream. It derives from director Chung’s own childhood when his family settled in the United States, which is why the film is told from the perspective of the youngest son, David.

Crafting a personal story into a film that aims to be universally popular is no easy task, but as Youn as Soon-ja exclaims in the film, audiences are shouting "Wonderful, wonderful Minari!" upon seeing the movie. What aspects of the film transcend continents to elicit such reaction? And how will those aspects impact "Minari" at the Oscars next month?

“I think we all as people around the world wrestle with the things that the Yi family is wrestling with, the idea of how we love each other in difficult situations, and I think a lot of people relate to that, it doesn't matter what country you’re from,” Chung said.

“Although the Yi family takes on the format of a conventional household — a strong father, kind mother, adorable children — what makes this family so special and idealistic is that they try to resolve their conflicts and pain within themselves,” film critic Jeong Min-ah said. “To Americans who value individualism, the Asian value of putting family first above everything else may seem precious. Especially in this pandemic situation, people are revaluing the meaning of family as they realize that their family members are the people they can rely on and trust the most, and maybe it’s because we’re facing a reality that we never could have anticipated that this familial narrative is hitting the chord globally.”

Film critic Kang Yoo-jung believes the narrative of a father pioneering a foreign land resonates with the American audience.

“It’s also the reason why Yeun was the best actor for the role,” Kang added. “The story of a father finding and cultivating his own piece of land overlaps with the American history [of pioneers]. If Yeun and Han Ye-ri [who plays the mother in the Yi family] portray the universal figures of parents seeking security, the film’s uniqueness lies in Youn. Soon-ja [Youn's character] shows off Korean characteristics and peculiarities which make her so distinct from other grandmothers. Youn’s character is what makes the film shine.”

Youn Yuh-jung, who portrays Soon-ja, the grandmother of the Yi family, in the film, was nominated for best supporting actress, a first for a Korean actor.[PAN CINEMA]


Wonderfully diverse
Little David is baffled and disappointed when Soon-ja arrives from Korea to help take care of the children. She doesn’t really seem to have the knack for childcare, she doesn’t bake cookies for him, is foul-mouthed and teaches him to play cards. David tells her that she doesn’t behave like “a real grandma” to which Soon-ja retorts, “What are real grandmas supposed to be like?”

“Minari” seems to ask Hollywood a similar question. What are real American films supposed to be like? The film stars an American, is directed by American, and is produced, financed and distributed by American companies. But approximately 70 percent of the film is in Korean — which was why the film was sidelined to the best foreign language film category at this year’s golden globes. The cast, director and crew have surnames such as Yeun, Han, Youn, Kim, Cho, Chung, Lee and Song, and although set in Arkansas, it is about a Korean immigrant family with Korean sentiments that are underlined by the arrival of Soon-ja.

The film title “Minari,” although spelled out in English, is a Korean word meaning water parsley. The director purposefully chose this Korean word so audiences would learn the name of the plant which inspired him to write his story.

By bestowing the film with six nominations — and not one in best international feature film category — film critic Kang contends that Oscars is reversing its tactics from last year and trying to send the message that local films are what makes the industry diverse.

“They [the Academy] is saying, ‘we have always included a variety [of films],’ and of course ‘Minari’ would be nominated as an American film,” Kang said. “[The Academy] completely overruled the dispute [over what constitutes a foreign film] at the Golden Globes. It's maintaining that all the nominees are American films, such as Chloé Zhao’s ‘Nomadland’ which also received multiple nominations this year. It’s parallel to last year when they promoted diversity by purposefully giving the main awards to a foreign film created and spoken in Korean.”

Another film critic Molly Kim pointed out that the American film industry was also impacted by the Trump administration and his anti-immigrant policies, which is why films created during the administration are being spotlighted at this year’s Oscars.

“I believe that this year was the most political year in the Oscars history,” Kim said. “Up until the 50s and 60s, Oscars were dominated by commercial Hollywood films. But this year’s nominees are politically correct films, filled with feminism, gender, racism and other social issues. 'Minari' is such case, but it’s been transgressed to tell its tale in the most sentimental way. Especially when comparing it to other best picture nominees, ‘Minari’ conveys its message in the most poetic way.”

During his Golden Globes acceptance speech, director Chung said that his film speaks “the language of the heart.”

“It goes deeper than any American language, any foreign language,” the director said. “It's a language of the heart and I'm trying to learn it myself and to pass it on, and I hope we all learn how to speak this language of love to each other, especially this year.”

Wonderfully Minari
Unlike Hollywood insiders who forecasted “Minari” would receive multiple Oscar nominations, local experts have been cautious about claims the film could garner as much success as Bong Joon-ho's “Parasite.” However, after the nominations were announced, critics were unanimous in the view that Youn will become the first Korean actor to receive an Oscar for her performance. The Oscars road map may be outlined more clearly on April 4, when the Screen Actors Guild Awards will be announced. Last Year anticipation for Oscar wins for “Parasite” was escalated even further when the cast received the SAG Award for Outstanding Performance by a Cast in a Motion Picture and went on to receive four Oscars including for best picture. The SAG awards for individual performance are even more telling. In the last decade, 18 of the 20 actors who won best actor or best supporting actress at the SAG awards went on to receive an Oscar.

“[Six nominations] for ‘Minari’ was definitely a surprise,” Kim said. “Not because ‘Minari’ was undervalued — but due to the coronavirus and it being an indie film, there is a wide gap between box office sales when comparing it to the success of ‘Parasite.’ And the promotion strategy of its distributor A24 is less aggressive than that of Neon ['Parasite's' promoter]. [But what’s interesting about this year’s contenders] is they are mostly low-budget films. There’s no big-scale films with grand narratives or war stories such as ‘1917’ [2019]. They’re mostly arthouse films with their own distinct themes, focusing on the actors’ performances. When comparing to last year’s nominees, it’s difficult to make a clear forecast since there’s no precedent.”

Jeong, on the other hand, puts “Minari” and “Parasite” in two very separate categories.

“’Minari’ and ‘Parasite’ are two separate films stemming from two very different backgrounds,” Jeong said. “’Minari’ is an American indie film — it’s not the kind to leave the audience in shock from some massive theme or powerful message, nor is it [even] a big-budget film [...] Its story and appeal lies in the simplicity of capturing the details of people’s everyday lives. I hardly remember any indie films that won the best picture in Oscars history, just off top of my head ‘Annie Hall’ [1978] and recently ‘Moonlight’ [2017], but nothing else. It depends on the outcome of the SAG awards, but as of now I predict it will receive best supporting actress and best original score. It’s actually a huge honor just to be nominated, and I sincerely hope that its importance is not underrated because of the success of ‘Parasite’ last year.”