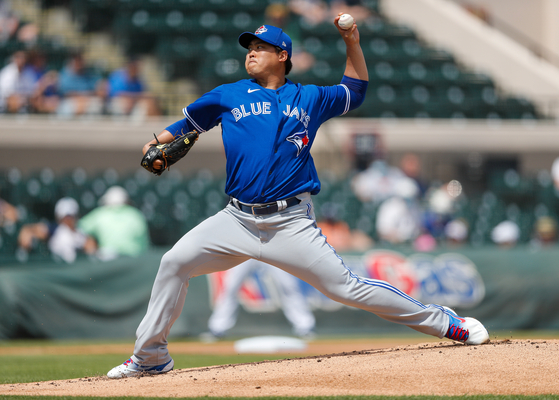 
Toronto Blue Jays ace Ryu Hyun-jin threw four scoreless innings with four strike outs to lead his side to a 4-0 win over the Detroit Tigers in a spring training exhibition game on Monday.


Ryu gave up just two hits in four shutout innings at Joker Marchant Stadium in Lakeland, Florida, a dominant performance in only his second exhibition game this year.

The Korean southpaw didn't need any time to warm up on Monday, recording two strikeouts in the first inning and continuing that form in the second, when he retired the side in order. Things started to slip a little in the third inning, when Ryu gave up two singles before settling down to retire the next three batters.

Ryu's second out of the inning came with a strikeout from a fading changeup that Tigers batter Victor Rayes had no chance of reaching. Ryu threw the changeup away after misreading the sign from catcher Danny Jansen, who had been expecting a ball inside.

Even with the wrong pitch, Ryu still picked up the strikeout and Jansen was able to cover the ball, proving that despite the occasional miscommunication, the pair are on strong form ahead of the new season.

Ryu entered the Monday game aiming to throw 60 pitches. In the end he only needed 49 pitches to close down four innings and had to head into the bullpen to round off the rest of his count.

"My pitch count has been building up slowly, and I should be ready come the start of the regular season a couple of weeks from now," Ryu was quoted by Yonhap as saying in a postgame interview. "Today, I pitched exactly the way I'd prepared."

Ryu has been praised by his teammates and management alike for his structured approach to spring training. At 33 years old and with two Cy Young finalist nominations in two seasons across both leagues to his name, Ryu knows exactly what he needs to do to get in shape for the new season.

“He's got a program that he follows,” said Blue Jays manager Charlie Montoyo. “And he doesn’t deviate from that.”

Montoyo isn't the only person to notice Ryu's commitment.

Ryu has just a couple of weeks left to finish his preparation, with the 2021 MLB season set to start on April 2 for the Blue Jays, with Ryu likely to lead off the opening game.

Choi Ji-man picks up a run in ALCS debut