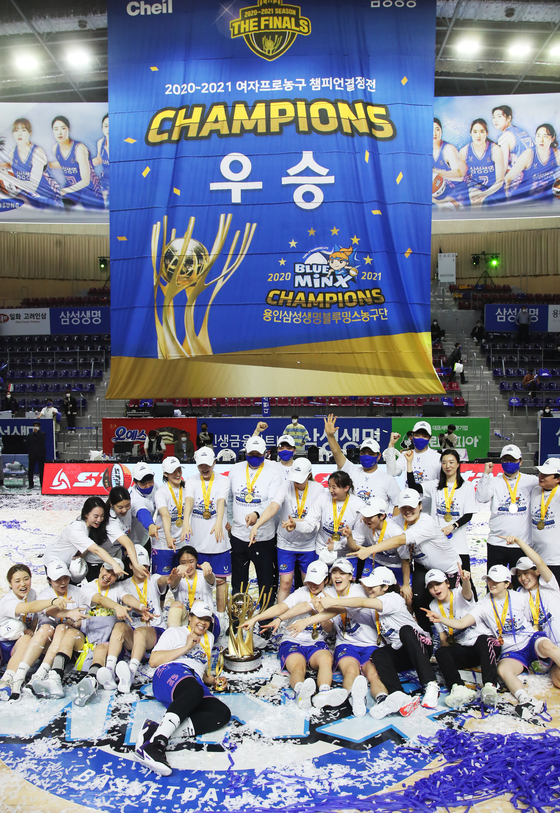 
The Yongin Samsung Life Blueminx won the Women’s Korean Basketball League (WKBL) Championship, beating the Cheongju KB Stars in the final despite having earned a spot in the playoff tournament as the lowest-ranked team.

The Blueminx beat the KB Stars 74-57 in the final game of the 2020-21 WKBL championship series at Yongin Gymnasium, in Yongin, Gyeonggi, on Monday.

Kim Han-byul, who averaged 20.8 points, 7.8 rebounds and 5.6 assists across the best-of-five championship series, was named MVP.

This is the first time that the Blueminx have won the championship title in 15 years, since the 2006 Summer League.

In fact, the Blueminx's dramatic victory made WKBL underdog history, making the first time ever that a team that finished fourth in the regular season has won the championship title.

A total of six clubs compete in the WKBL, with the top four all qualifying for the championship tournament. The fourth-placed team enters as a serious underdog, having finished the regular season in the bottom half of the league.

Remarkably, the Blueminx were actually the first fourth-place team with a shot at glory. Until last season, only the top three teams entered the playoffs.

The Blueminx then went on to face the KB Stars in the finals. Samsung won the first and second round, but lost the third and fourth to the KB Stars to force the series to five games.

“The opponent team has one big weapon [Park Ji-soo], and we will do our best to give them a hard time," said Blueminx head coach Im Geun-bae before the final game. "Samsung Life hasn't reached the top for 15 years, but as the opportunity came, we will try [for the championship] with will and aspiration."


MVP Kim led the scoring with Yun Ye-bin, Bae Hye-yoon, Kim Dan-bi and Kim Bo-mi all adding to the scorecard, giving the Blueminx a 41-28 lead by the third quarter.

The KB Stars’ 1.96-meter-tall center Park seemed tired early on, as the attacks centered around her. She scored 17 points and 16 rebounds, but it wasn’t enough to stop Samsung.

Kim led the victory with 22 points, 7 rebounds and 5 assists in the fifth game, with all five offensive starts scoring in the double digits.