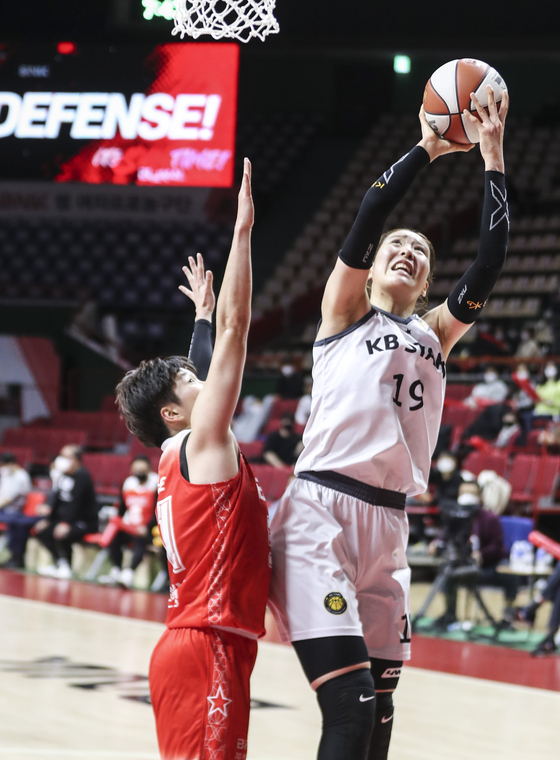 
Park Ji-su became the youngest player ever in the WKBL to make her career 2,000th rebound on Monday as the Cheonju KB Stars extended their winning streak to seven matches with a 85-72 victory over Busan BNK Sum.

The KB Stars beat BNK 85-72 in a home game at Cheongju Gymnasium on Monday. Stars ace Park was the one to do in once again for the club, scoring 31 points, 16 rebounds and 10 assists in Monday’s match. That 31 points is her second-highest of the season, after she scored 32 points in a match against BNK on Nov. 17.

Park also marked her fourth triple-double of her career. A triple-double is when a player reaches double digits in at least three statistical categories in a match.

All WKBL clubs will play 30 matches this season and the KB Stars top the standings with more than half already played, 4.5 wins ahead of Woori Bank.

The WKBL regular season matches resume on Dec. 30. This season's All-Star game was scheduled to be held at Yongin Gymnasium in Yongin, Gyeonggi on Dec. 26, but was canceled on Dec. 14 due to concerns over the growing number of Covid-19 cases in Korea.

This is the second year that the All-Star game has been canceled due to the Covid-19 pandemic. The last time the game was played — in January 2020 as part of the 2019-20 season — Park won the MVP award.