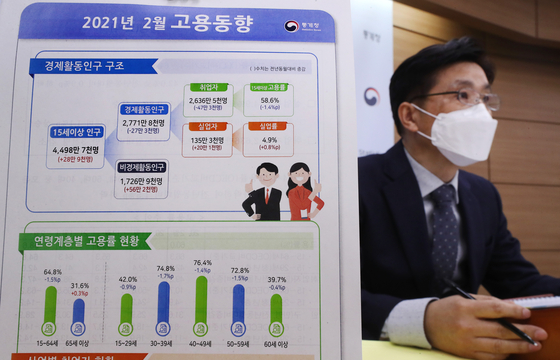 
The number of people employed shrunk for the 12th month in a row, with 473,000 fewer jobs in February than a year before.

That was the longest stretch of consecutive monthly job losses since 16 months during the Asian economic crisis between January 1998 through April 1999.


According to Statistics Korea on Wednesday, there were 26.4 million people employed in February, a 1.8 percent year-on-year decline as Covid-19 continues to disrupt the economy.

Yet the government claimed to see a silver lining in the latest jobs report.

Finance Minister Hong Nam-ki said February’s jobs decline was a significant improvement considering that it was half the near 1 million losses recorded in January.

“The number of people that lost jobs has halved compared to January’s 982,000,” Hong said in a Facebook post Wednesday. “The difficulty in the job market due to Covid-19 markedly eased.”

Hong stressed that hiring by businesses that rely on face-to-face services including restaurants and lodging is “rapidly recovering.”

He gave credit to strong exports, which helped improve the job situation in factories.

“Additionally, government job programs that kicked off [in February] have contributed to relieving difficulties in the job market,” Hong said.

Government job programs did boost jobs for people aged 60 or older.
In February, that was the only age group that saw an increase compared to a year earlier. In January, all age groups saw job reductions.

Last month, 212,000 people aged 60 or older landed jobs, bringing the total number of people in this group employed to 4.9 million, a 4.5 percent increase over a year earlier.

By industry, health and welfare was the only area in which jobs increased -- by 910,000 or 4 percent -- which were jobs created by the government.

In other industries, jobs fell but at a slower rate than in January.

The month was particularly brutal for industries that offer face-to-face services. These businesses have been hurt by the government’s social distancing regulations.

The wholesale and retail sector, the second-largest employer accounting for 12.8 percent of Korea's jobs, lost 194,000, a 5.4 percent decline. January was even worse with 218,000 lost jobs.

Restaurants and lodging, the third-largest employer accounting for 7.8 percent of Korea's jobs, lost 232,000 a 10.2 percent decline.

In February, the number of self-employed shrunk 156,000 compared to a year ago, a 10.7 percent drop, showing the impact of the pandemic on businesses likes small restaurants and coffee shops.

The education service industry, which are mostly cram schools known as hagwon, lost 82,000 jobs, a 4.5 percent decline. That’s more than the 75,000 jobs lost in January.

The number of people unemployed eased from nearly 1.6 million in January to above 1 million in February, which was a 17.4 percent year-on-year increase.