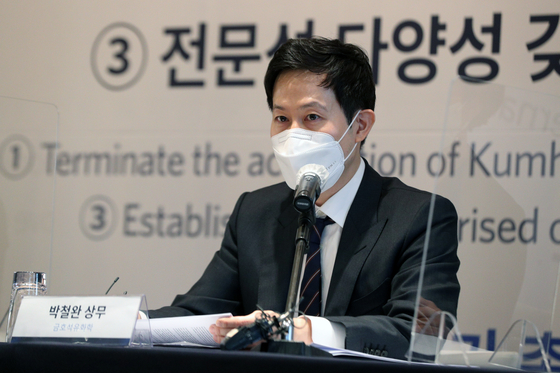 Park, the largest shareholder of Kumho Petrochemical and the chairman’s nephew, on Wednesday said that he welcomes the recommendation made by Glass Lewis to support his shareholder proposal.

Park’s proposal includes recommending himself as an executive director of the company and raising the dividend almost 10-fold, which ISS said was too aggressive.

“Shareholders would be best served by electing him to the Company’s board of directors at this time,” said Glass Lewis, according to Park.

Glass Lewis said Park will be able to raise shareholder value and improve corporate governance as well as financial capabilities under Park’s leadership as an executive director, according to a press statement released by Park.

On the same day, Park argued that the company’s management team has been “illegally offering ginseng gift sets” in return for asking them to vote in favor with the board, calling such an act “unethical.”

The company's shareholder meeting is scheduled to take place on March 26.