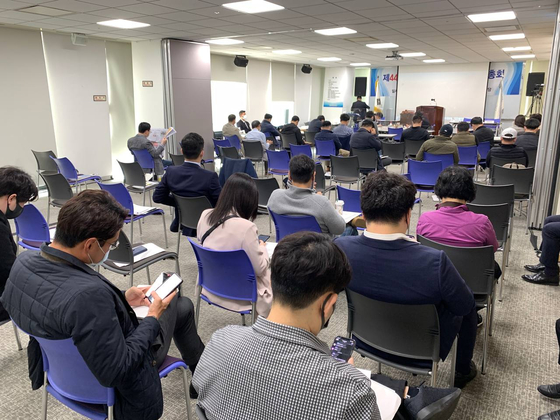 
Shareholders rejected Park Chul-whan bid to get on the board of Kumho Petrochemical at an annual general meeting in central Seoul on Friday, along with his proposal to increase the dividend by almost ten times.

Park, a senior vice president of the company and nephew of chairman Park Chan-koo, submitted a shareholder proposal in January recommending he join the company's board and a hike in the dividend from 1,500 won ($1.30) per share to 11,000 won.

The company's management proposed a dividend of 4,200 won per share, which was accepted by shareholders.

Baek Jong-hoon, executive vice president at the company, was appointed to the board instead of Park.

The younger Park's proposals have put him at odds with his uncle over managment of the company.

Park Chul-whan is a son of the late Kumho Group Chairman Park Jeong-koo and is the largest individual shareholder of Kumho Petrochemical.

“The management conflict has been concluded from this shareholder meeting, and the company will now be evaluated based on its corporate value, according to [industry] evaluations,” said the company in a statement on Friday.

“I am more than grateful to shareholders for their support,” said Chairman Park in a statement. “I, along with the company's employees, will humbly focus on raising corporate value and strengthening its ESG [environmental, social, governance] values.”

Park Chul-whan also responded, “This is just the beginning, not the end,” he said in a statement, adding he will continue to strive to raise corporate value and protect shareholder interests.

“I expect the shareholder meeting to be recognized as a need to improve management and corporate governance, and the beginning of an effort to take action,” said Park.

He added that he continues to oppose the company’s decision to acquire Kumho Resort, saying it has too much debt and does not generate synergy effects with Kumho Petrochemical.

“The shareholder proposal is not a conflict over management control, but is a justifiable right of a shareholder to contribute to the company as a shareholder,” Park added.

Prior to the meeting, Glass Lewis, an American proxy advisory, sided with the younger Park, while International Shareholder Services, another proxy advisory group, sided with management, saying Park’s proposal to increase the dividend to 11,000 won was too aggressive.

Shares of Kumho Petrochemical closed 5.99 percent up Friday from the previous trading day to 239,000 won.