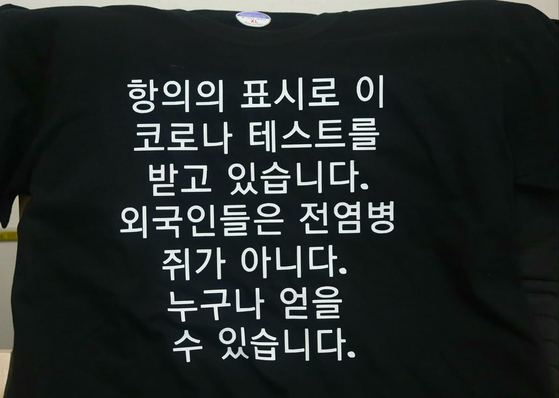 A photo uploaded in a Facebook group for the foreign community in Korea on Tuesday. Part of the message reads, ″Foreigners are not infectious pests.″ [SCREEN CAPTURE FROM A FACEBOOK GROUP]

The Seoul city government’s directive to foreign workers to get tested for Covid-19 by the end of the month is provoking disgruntlement among the expat community in the city.

“All foreigners working in Seoul are mandated to be tested for Covid-19 by the end of the month,” Park Yu-mi, the general director for citizen's health of the Seoul city government said during a press briefing Wednesday. “The directive goes into effect today. All companies with at least one foreign worker in Seoul will be sent notices to encourage them to have their workers tested by March 31.”

The order applies to all foreign workers in Seoul with a business contract, which excludes students, tourists and diplomats.

“The directive does not apply to diplomats, because they are not working for a company, but a government,” a Seoul city government official told the Korea JoongAng Daily.

Any foreign worker in Seoul who fails to get tested by the end of the month can be fined up to 2 million won ($1,770).

“The foreign workers will have the option to get tested anonymously, but we encourage them to tell their employers that they have undergone the testing once they do,” Park said.

“It is racist. Did they test all religious people every time a church had an outbreak?” wrote one user in a group of foreign nationals on Facebook on Wednesday.

“Covid is being spread mostly by Koreans, but they’re only mandating that all foreigners get tested, whether they are at risk or not. That is the controversial part,” wrote another user in the group.

Foreigners accounted for 6.3 percent of infections in Seoul from January to March, according to the city government Wednesday.

But responses were less aggrieved.

“It’s a free test what’s the big deal? You [want to spread] covid like in EU or US?” wrote another user in the Facebook group.

The city government said it is actually looking out for the health of its expat residents.

“We are not asking all foreigners to be tested in the city, but rather focusing on those who are employed in the city,” Park said. “There was a cluster based in Yongsan last month, which involved a number of foreigners. The directive is to protect the health of the foreign population in Seoul.”

Park added that foreign workers who wish to find the nearest testing center should call 1345 or 1330. Interpretation is available on the call.

Other local governments have issued similar directives to foreign workers in their districts.

A group of people have written a petition to the Blue House calling the order discriminatory.

“The mandate stating that all foreigners, whether they are symptomatic or not, working in Gyeonggi-do are required to be tested for Covid by March 22nd is discriminatory and xenophobic,” reads the petition written on Monday. “I call for the Blue House to remove this mandate in Gyeonggi-do, and prevent any future blanket mandates requiring only foreigners to be tested for Covid.”

The petition was signed by over 2,100 people as of Wednesday.

For some long-time Seoulites with foreign passports, the order from the city government was discouraging and possibly even dangerous.

“I'm finding it hard to see the decision as one that is objectively good or necessary,” said an American national who asked to be identified only by his first name, Stephen. “Discrimination aside, I don't see how asking a large number of people, who otherwise have no connection to each other, to go to clinics, cross paths, touch the same things, and go home is good for preventing the spread of Covid-19.”

Stephen has been residing in Korea since 2017. He is an English teacher at a private cram school in Seoul.

“I find that foreigners get painted as flighty people who come to Korea, see the sights and then leave, and I just want to be clear that I am not like that. I've switched visas, paid my taxes, my [recycling] skills are amazing, I donate clothing, and I translate on a daily basis to help everyone understand each other a little better,” he said. “When the government does something like this, it is very hard to not be angry and discouraged […] Our foreign-ness speaks louder than the logic behind objective testing procedures and it's not a good look for the Korean government.”