Kim Ha-seong gets first RBI for the Padres

Kim Ha-seong gets first RBI for the Padres 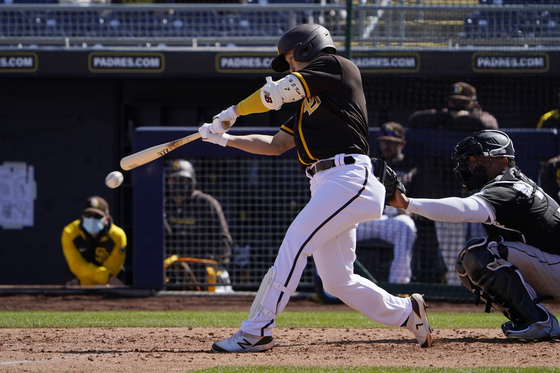 
Kim Ha-seong of the San Diego Padres picked up his first RBI for the major league club in an exhibition game on Tuesday.

Kim started at shortstop and batted sixth in the game against the Chicago White Sox at Peoria Sports Complex in Arizona on Tuesday.

Kim recorded one hit and one RBI in two at-bats, raising his overall batting average in exhibition games to 0.150 with three hits in 20 at-bats.

Meanwhile, Kim also recorded an error and was caught stealing during Tuesday’s game.

Kim, who missed the previous two days of work after coming down with what manager Jayce Tingler called "aches and pains," committed a throwing error at the top of the first inning. Kim fielded a hit from White Sox shortstop Tim Anderson but his throw to first base was wide, pulling Eric Hosmer off the bag.

Kim went out with a grounder to second base in his first at-bat with two outs at the bottom of the second inning.

He came back to the plate at the top of the fourth against right-hander Reynaldo Lopez, sending the ball into center field. Kim's hit bounced off of Anderson's glove and was originally recorded as an error, but was changed to a hit and he was awarded the RBI as Will Myers scored.

Tuesdays hit was Kim’s first in six games, since facing the Texas Rangers on March 5.


Kim was then immediately caught trying to steal second base.

The Padres ended up losing 4-3. Kim left the ground after being replaced with C. J. Abrams in the seventh inning.

Kim, formerly of the Kiwoom Heroes, signed a $28-million deal with the Padres in December.