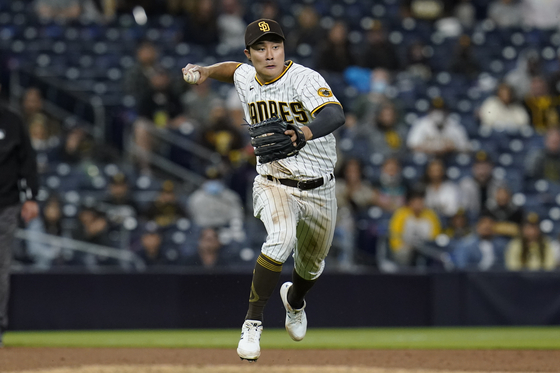 San Diego Padres third baseman Kim Ha-seong throws to first for the out on Pittsburgh Pirates' Todd Frazier during the ninth inning of a baseball game in San Diego on Wednesday. [AP/YONHAP]

After a slow start to the 2021 season, Kim Ha-seong of the San Diego Padres is starting to look comfortable in the majors.

Kim has appeared in 24 of 31 Padres games so far this season, recording 12 hits, four RBIs and one home run in 61 at-bats. That leaves his batting average at .197, just below the dreaded Mendoza line.

But while Kim is still struggling to pull his eight at the plate, the KBO veteran is starting to show off some of his defensive prowess. Kim played as a shortstop for the Kiwoom Heroes in the KBO, but has switched positions with the Padres, playing at second, third and shortstop.

Despite the constant change of pace, Kim has still found time to show off his defensive skills, piecing together a few key plays against the Pittsburgh Pirates earlier this week.

"The team wants me to be a utility-type player, and so I am trying to focus on the field wherever I play," Kim was quoted as saying by Yonhap on Wednesday. "I've been preparing for this since spring training. The current situation with the team dictates that I won't play every day, and I just have to keep working hard and stay sharp. It's the reality that I have to accept and I want to make sure my lack of playing time doesn't show on the field when I am out there."

Like Yang Hyeon-jong of the Texas Rangers and Kim Kwang-hyun of the St. Louis Cardinals, Kim Ha-seong was in action again on Wednesday, but went hitless in four at bats.