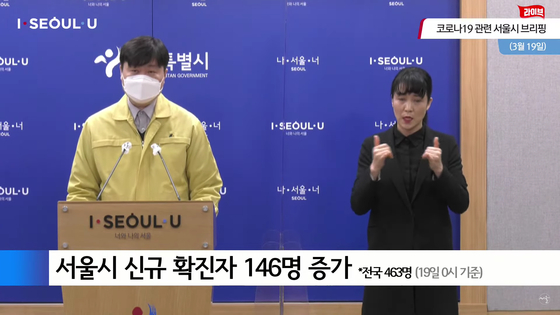 A Seoul city government official in a press briefing at the City Hall on Friday. [SCREEN CAPTURE]

Seoul’s city government rescinded its order to all foreign workers to be tested for Covid-19 by the end of the month after pressure from the central government.


The order was replaced with a recommendation to get tested.

“Following a request from the Central Disaster and Safety Countermeasure Headquarters to retract the city government’s administrative order [...] the city government decided to change the order to a recommendation,” the Seoul Metropolitan Government said in a statement Friday.

“We hereby recommend Korean and foreign workers working in close proximity in restricted spaces with poor ventilation in the city to be tested for Covid-19.”

Recommendations from the city government are not legally enforceable.

Earlier on Friday, the Central Disaster and Safety Countermeasure Headquarters, which is operated by the Ministry of Health and Welfare, announced that it asked the Seoul city government to “quickly rescind” the order.

“The headquarters made the request to ensure that Covid-19 prevention measures do not lead to discriminatory policies toward any people in Korea, foreigners and Koreans alike,” the Health Ministry said in its statement on Friday.

“After hearing the concerns raised by various members of society on possible infringements of basic human rights of foreign workers, we decided it was best to change the order,” an official of the city government told the Korea JoongAng Daily. “But we are still hoping that some foreign workers and Korean workers will voluntarily choose to get tested for Covid-19 if they work in high-risk environments.”

After the city government issued the directive on Wednesday, petitions were filed to the Blue House and to the National Human Rights Commission of Korea complaining of possible human rights violations.

“We are currently investigating whether there were factors of human rights violations in the local governments’ directives,” an official of the National Human Rights Commission of Korea told the Korea JoongAng Daily.

Gyeonggi provincial government had also issued such a directive to its foreign workers earlier in the month to be tested for Covid-19 by next Monday.