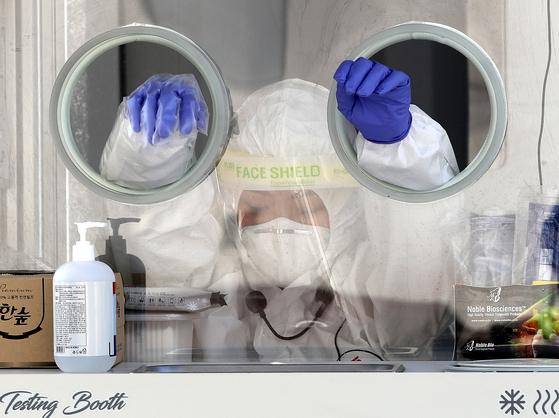 A quarantine official at a Covid-19 testing center on Wednesday in Dongducheon, Gyeonggi, which has recently seen a spike in virus cases in its foreign communities. [NEWS1]


The cluster of infections involving foreign workers in Gyeonggi is growing to nearly 100, according to health authorities Wednesday.

Health authorities in Dongducheon are testing the city’s nearly 4,000 foreign residents after clusters of infections broke out in foreign communities at factories in Yangju and other cities in Gyeonggi last month.

A total of 1,014 tests were conducted as of Tuesday, of which 96 turned out positive. While all are residents of Dongducheon, they work in various cities throughout Gyeonggi, including Yangju, Pocheon, Namyangju and Incheon.

The Dongducheon city government issued a directive Wednesday to all employers in the city hiring foreign hands to ensure their foreign workers are tested by March 10, or be fined up to 2 million won ($1,780).

“The directive was issued to help stop the spread of the virus in the local communities,” said Dongducheon Mayor Choi Yong-duk in a statement Wednesday. “We ask all employers to comply and help their foreign workers get tested in time.”

The recent spike in cases involving foreign workers is not a first for Korea. Over 100 foreign workers at a plastic factory in Namyangju tested positive last month, many of whom lived together in a staff dormitory.

Korea added 444 new cases of Covid-19 infections on Tuesday, of which 18 were imported. Amongst the local cases, 116 were based in Seoul and 218 in Gyeonggi. Korea's daily new additions were in the 300s over the weekend and through Monday.

The cluster at Kiturami Boiler factory in Asan, South Chungcheong, which broke out in mid-February, has grown to 205 as of Tuesday.

A growing cluster at a call center in Gwangju recorded a total of 70 cases as of Tuesday.

The imported cases on Tuesday concerned those who flew in from Russia, Indonesia, India, Azerbaijan, Bangladesh, Japan, Kazakhstan, France, Germany, the United States and Brazil.