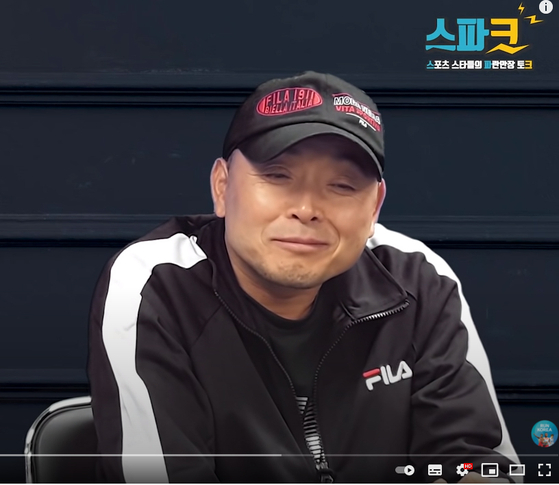 Marathoner Lee Bong-ju recently appeared in a TV program and said he is suffering from an incurable disease. [YOUTUBE SCREEN CAPTURE]


Upon finding out Olympic marathon silver medalist Lee Bong-ju has been suffering from an incurable disease for over a year, his hometown of Cheonan rose to the occasion.

Lee is referred as the national marathon hero, a title he earned after raking up international competition awards, including a silver medal at the 1996 Atlanta Olympics, a gold medal at the 1998 Bangkok Asian Games, and first place at the 105th Boston Marathon in 2001. Lee retired at the age of 39 after winning a marathon at the 2009 Daejeon National Sports Festival.

In TV Chosun's documentary program "Star Documentary My Way” aired on March 19, viewers were shocked to see Lee, his back helplessly hunched over, confess that he has been suffering from a disorder called dystonia since January last year.

Dystonia is a disease caused by damage to or abnormalities in the brain and is classified as an incurable disease. Symptoms usually occur in the neck or jaw, involving sudden involuntary twisting or turning, which result in muscle abnormalities accompanied by pain. Musicians, writers and athletes often suffer from the disease as they repeatedly use certain muscles.

In the program, Lee admitted that the illness has incapacitated him, as his neck and his back have already been bent considerably.

After hearing about Lee’s condition, his hometown, Cheonan, and the Cheonan Sports Association from came together and discussed ways to support the marathon hero.

“[People] wanted to help Lee, so the sports community started a voluntary donation,” said an official at the Cheonan Sports Association.

City officials, including Cheonan Mayor Park Sang-don and the city hall labor union, have also participated in the fundraising campaign.

On Monday, Mayor Park and Han Nam-kyo, president of the association, visited Lee’s house in Cheonan, where the marathoner lives with his mother.

“I was more encouraged by the brightness of Lee than I was worried [about him]. Our hero Lee Bong-ju is a person who has exceptional filial piety and a [considerate] mind,” the mayor wrote on a Facebook post Monday, adding, “I ask for the warm attention and encouragement of each and every Korean and citizen, so that Lee can fight against the unknown disease and rise and run again vigorously."

Han also posted on Facebook, "I hope that Lee will be able to rise again in good condition just as he achieved the marathon feats with his indomitable will and determination."

During his career, Lee overcame the physical handicaps of flat feet and grew into a world-class marathon runner. Lee said, "Life is a marathon. I will overcome the current [disease] with my inner strength like I’m running a marathon," showing his strong will to recover.