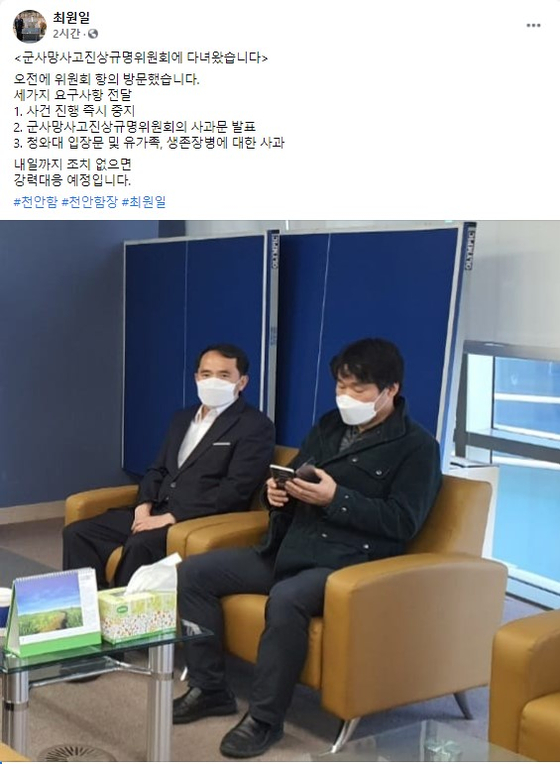 The Cheonan's captain, Choi Won-il, posted a photo of his Thursday visit to the office of the Presidential Truth Commission on Deaths in the Military to protest the decision to accept a petition for a re-inquiry into the sinking of the corvette. [FACEBOOK]


In a decision made public Wednesday, a presidential commission accepted a petition last December to reinvestigate the sinking of the Navy ship Cheonan, sparking outrage among surviving crew and families of the fallen.

The Presidential Truth Commission on Deaths in the Military decided to open an investigation on Dec. 14 after receiving a petition on Sept. 7 for another inquiry from Shin Sang-cheol, a former member of the Joint Civilian-Military Investigation Group (JIG) which looked into the sinking.

The Cheonan was a naval corvette which sank in the Yellow Sea near South Korean-controlled Baengnyeong Island on March 26, 2010, following an explosion that caused the ship to break in half. Fifty-eight crewmembers were rescued, and 46 perished.

The JIG, a South Korean-led multinational investigative group, issued a summary of its findings in May of the same year. It concluded that the Cheonan sank due to a non-contact underwater explosion, which the group blamed on a North Korean torpedo which detonated close enough to the stern section of the hull to cause severe damage.

Shin, who claimed that the Cheonan sank after running aground before he joined the JIG, continued to write articles for his own online media outlet after the findings were released, saying that the then-conservative government fabricated the cause of the sinking.

As a result, Shin was indicted for defaming the military and JIG members. Although being found guilty and sentenced to eight months’ imprisonment in February 2016, he won his appeal in October last year. The appeals court acknowledged that his articles were false but said defamatory intent had not been proved.

The fact that the commission accepted Shin's petition for an inquiry into the sinking provoked outrage.

“I want to douse myself in gasoline and die in front of the Blue House,” said Jeon Jun-yeong, chairman of the Cheonan veterans’ association, in a Facebook post uploaded Thursday.

Choi Won-il, captain of the Cheonan, visited the commission’s office to protest on Thursday, demanding the body stop the proceedings in relation to the petition and that the Blue House issue an apology to the survivors and families of the fallen.

In a Facebook post, Choi said, “I cannot believe that the commission accepted the petition of a conspiracy theorist. I want to hear the reasons for which a presidential commission has decided to go against the word of a president who said the government’s position has not changed [on the North’s role in the Cheonan sinking].”

In March last year, a mother of one of the killed crewmembers approached President Moon at a ceremony marking the anniversary of the sinking and asked him who sank the Cheonan. The president responded that it was North Korea.

Due to backlog, families of the Cheonan’s crew and Shin are likely to be interviewed by the commission in the latter half of the year. The commission will not pursue an inquiry if the surviving families do not want one.