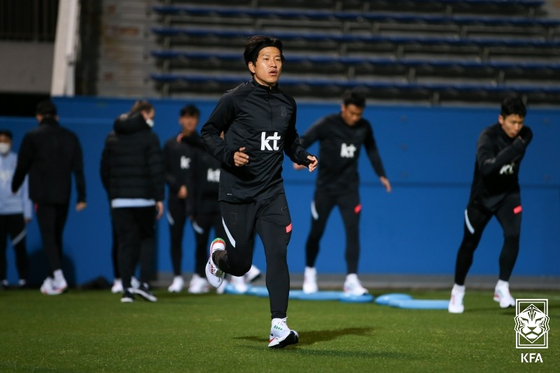 The Taeguk Warriors train at a practice ground in Yokohama, Japan, on Tuesday. [YONHAP]


The Taeguk Warriors could face a tough challenge in Japan when the two teams face off in Yokohama on Thursday, with a number of first team players including captain Son Heung-min unable to join the squad due to injury.

When Korea will take on Japan at Nissan Stadium in Yokohama at 7:20 p.m. on Thursday, Son will still be at home in London with a hamstring injury. He isn't the only familiar face missing from the game, with forwards Hwang Ui-jo and Hwang Hee-chan both kept back by their European clubs and Hwang In-beom, Kim Jin-su, Um Won-sang and Yoon Bitgaram all injured. Rounding off the list, midfielder Ju Se-yong has tested positive for Covid-19.

Between them, the eight missing players have scored a total of 51 goals for Korea, with Son and Hwang Ui-jo leading the scoring among all active players by a considerable distance. Without any of that offensive prowess on the field, it's unclear exactly where Korea's goals are going to come from.

Defensively the Taeguk Warriors remain largely unaffected, although powerful center-back Kim Min-jae, known as The Monster for his dominant physical presence, has not been released by his Chinese club and won't be able to play. Most of the rest of Korea's usual defense remains in place, but faces a tough challenge in the surgical precision of the Japanese offense.

Korea and Japan have faced off a total of 79 times in the past, most recently in December 2019, and the Taeguk Warriors are well ahead with a total of 42 wins, 23 draws and just 14 losses to date. Korea have won the last two meetings — 1-0 in December 2019 at the EAFF E-1 Football Championship and 4-1 in the 2017 edition of the same tournament.