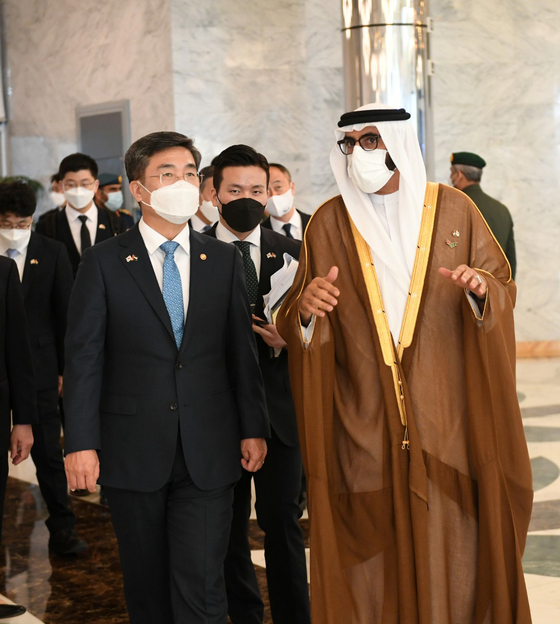 Suh met with Mohammed Ahmed Al Bowardi, the UAE minister of state for defense, and Lt. General Hamad Mohammad Thani Al-Rumaithi, chief of staff of the armed forces, and other UAE defense officials during his visit.

The defense minister arrived in the UAE on Sunday for a four-day visit at the invitation of the Al Bowardi to hold their annual security talks. He departed for India on Thursday to meet his Indian counterpart, Rajnath Singh.

Although it did not offer specific details on the content of the talks, the Korean Ministry of Defense said the two countries held discussions on ways to boost mutual cooperation in the defense and armaments businesses.

The militaries of Korea and the UAE have lent their support to homegrown companies in advancing native weapons technologies and export capacity in recent years.

For the UAE, the effort to reach out to new arms industry partners comes at a delicate juncture.

In February, U.S. President Joe Biden announced his administration would end support for offensive operations in Yemen, where more 110,000 people are estimated to have died in a six-year war between the Yemeni government and the rebel Houthis.

As a result, the United States has stopped the sale of precision-guided munitions to Saudi Arabia and the UAE.

The talks between Suh and his UAE counterpart come as both nations aim to establish footholds in the lucrative Middle Eastern arms market, one of the largest net importers of arms in the world.

Korea has identified the high-end aerospace defense as a key field for exports.

Earlier this month, Korea Aerospace Industries (KAI) signed a memorandum of understanding with Israel Aerospace Industries (IAI) to collaborate in developing manned-unmanned teaming (MUM-T) systems for Korea’s domestically developed light armed helicopter, which is due to complete development in 2022.

KAI is also due in April to unveil the prototype of the country’s first indigenously developed experimental fighter jet, the KF-X, next month.

Abu Dhabi-based small firearms company Caracal, founded through cooperation between the UAE armed forces and European weapons designers, has secured contracts to supply the service pistols to various armies and security forces in the region.

Arms experts say that the path for Korean companies to gain a share of the market may not be straightforward.

Defense expert and columnist Choi Hyeon-ho says, “The Middle East and the Gulf region is the biggest importer of weapons in the world. It is therefore also home to fierce competition between countries and companies.

“Domestic companies may find that opening a path for defense armaments exports may not be so easy. They should create joint ventures with local partners to penetrate the Middle Eastern market.”