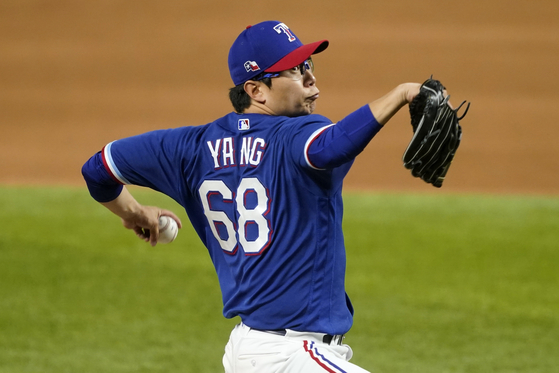 Texas Rangers relief pitcher Yang Hyeon-Jong throws to the Milwaukee Brewers in the sixth inning of a preseason baseball game in Arlington, Texas on Monday. [AP/YONHAP]


Yang Hyeon-jong of the Texas Rangers may have blown his shot at a bullpen spot for opening day on Thursday, giving up two runs in two thirds of an inning in a disappointing spring training outing on Monday.

Pitching against the Milwaukee Brewers at the top of the sixth inning in an exhibition game at Globe Life Field in Arlington, Texas, Yang started his outing by giving up a walk to Christian Yelich.

With Yelich on base, Yang appeared to find his feet, retiring the next two batters with flyouts. The MLB rookie wasn't able to hold it together, however, walking Lorenzo Cain and Omar Narvaez to load the bases with two outs.

The resulting mound visit wasn't enough to calm Yang down, and he quickly gave up a two-run double to Orlando Arcia to double the Brewers' lead at 4-0.

That was the end of Yang's outing, and he headed off the field with a 5.40 ERA and his chance of earning that all-important bullpen spot suddenly looking a lot less likely.

Yang seemed to have pulled that off, in his first three spring training appearances for the Rangers as a bullpen pitcher with a 3.00 ERA, giving up just six hits and two runs in six innings pitched. He then got a chance to start last week, giving up two runs on five hits in three and two thirds of an inning, but not doing enough damage to seriously harm his shot at a bullpen spot.


With Monday's unfortunate outing, Yang's chance of earning a spot in the bullpen seems to be fading, although he may still be given a shot based on his earlier performance.

The Rangers will start their 2021 season against the Kansas City Royals on Thursday at Kauffman Stadium in Kansas City, Missouri, or at 5:10 a.m. on Friday in Korea.