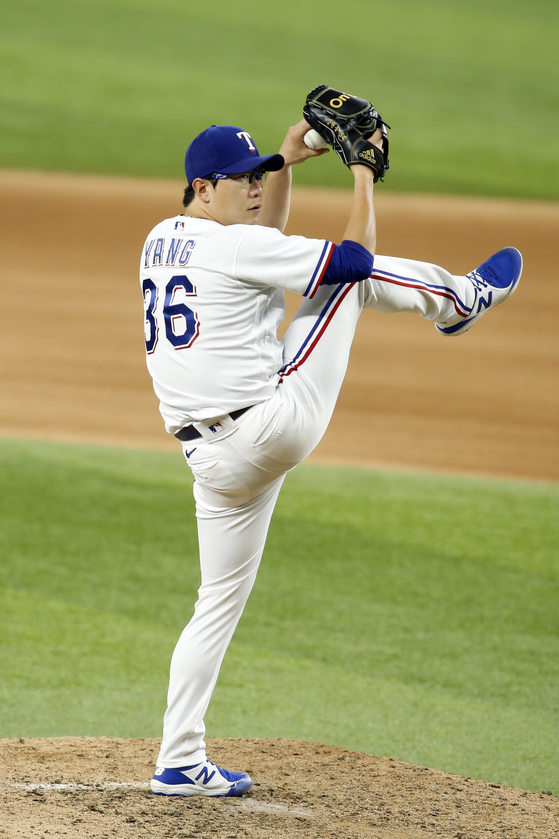 Yang Hyeon-jong pitches for the Texas Rangers in the seventh inning of a game against the Houston Astros at Globe Life Field in Arlington, Texas on Monday. [USA TODAY/YONHAP]


Yang Hyeon-jong's yo-yo U.S. career took another turn on Tuesday as the Texas Rangers southpaw was once again sent down to the minors.

The Rangers announced Tuesday that Yang had been back to the Triple-A Round Rock Express, sending the former KBO MVP back to the minor leagues after three games in the majors.

Yang has had a rollercoaster year shuttling between the majors and minors in the Rangers farm system. Yang joined the Rangers on a minor league contract this season, was called up in late April and then sent down again in June after a difficult few starts.

He bounced back up again in late August, appearing in a single game against the Houston Astros on Aug. 28, giving up three hits with one walk and one strikeout in two innings pitched.

He was briefly sent down again when the club reactivated Jonah Heim from the Covid-19 injured list, but returned within 24 hours when MLB rosters were expanded from 26 to 28 players.

Yang appeared in three games during his latest stint. On Sept. 1 he pitched a hitless one third of an inning with two out at the top of the ninth to close down the game for the Rangers.

Things took a turn for the worse on Sept. 10, when Yang gave up two runs on five hits in one and two thirds innings. Those woes continued this week, when he gave up two homers on four hits in two and one third innings on Monday.

Those three outings leave Yang with an 8.31 ERA for the month of September and a ticket back to the minors. His season ERA now stands at 5.60.

Pitcher Wes Benjamin was also sent down alongside Yang, while pitcher Drew Anderson and infielder Brock Holt were activated off the injured list.