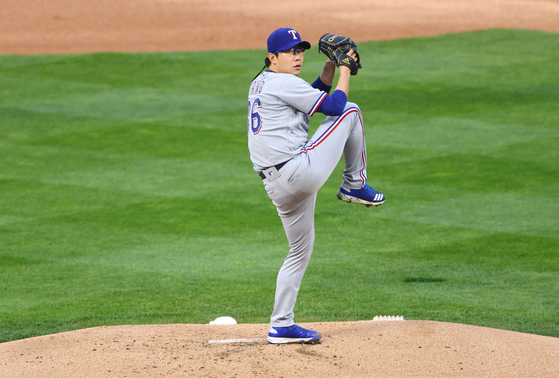 Yang Hyeon-jong of the Texas Rangers pitches in the first inning against the Minnesota Twins at Target Field in Minneapolis, Minnesota on Wednesday. [AFP/YONHAP]


Yang Hyeon-jong made the first start of his fledgling major league career on Wednesday, throwing eight strikeouts and giving up one run in three and one third innings.

Yang, who has gone from taxi squad to reliever to starter in less than two weeks, put on a show against the Minnesota Twins at Target Field in Minneapolis, Minnesota, becoming only the second player in Rangers history to record eight strikeouts in so few innings. Yang allowed four hits and one run for a 2.25 ERA.

The Korean southpaw started on blistering form, striking out the first three batters in order with only three balls between them. The second started with a groundout followed by a solo home run from Mitch Garver, the only run Yang gave up in the game. Rather than being shaken by the big fly, the MLB rookie returned with back-to-back strikeouts to close the door again.

The dominance continued in the third inning, which also started with back-to-back strikeouts, followed by a double and then a pop out to end the inning.

Yang looked a little more shaky at the top of the fourth, giving up a single, a double and a walk to load the bases with no outs. After a brief mound visit, Yang threw a strikeout before being pulled for reliever John King, who ended the inning with a couple of forceouts.

Yang walked away with a no decision but the Rangers took a 3-1 win with runs in the fourth and sixth. Although he did allow four hits, Yang's impressive eight Ks ensured that the Rangers knew exactly what he could do on the mound. With Yang elevated as a spot starter on this occasion, that dominant performance could prove crucial in ensuring he gets more chances in the rotation.

Yang's sudden rise through the ranks has given Rangers' manager Chris Woodward more options, as the Korean southpaw has years of experience playing as a starter for the Kia Tigers in the KBO. After getting called up to the Rangers only last week, Yang gave up just two hits in eight and two third innings in two long reliever appearances before Wednesday's start.

Yang joined the Rangers on a minor league contract this year with a chance to compete for a major league spot. He played 14 years in the KBO with the Kia Tigers, winning the ERA title in both 2015 and 2019. In 2017, he led the Tigers to the Korean Series title, winning both the regular season and championship MVP titles along the way. Yang has a career ERA at 3.83 with 147 wins and 95 losses in the KBO.

Yang and Kim Kwang-hyun of the St. Louis Cardinals both started on Wednesday, a relatively rare occurrence in the MLB where there are only three Korean pitchers. Kim Ha-seong of the San Diego Padres also started at third base for his side. All three Koreans played for teams that picked up a win.

Ryu Hyun-jin, the most-experienced Korean in the majors, was due to start for the Toronto Blue Jays on Thursday as of press time, while Choi Ji-man, first baseman for the Tampa Bay Rays, is currently recovering from surgery in the minor leagues.