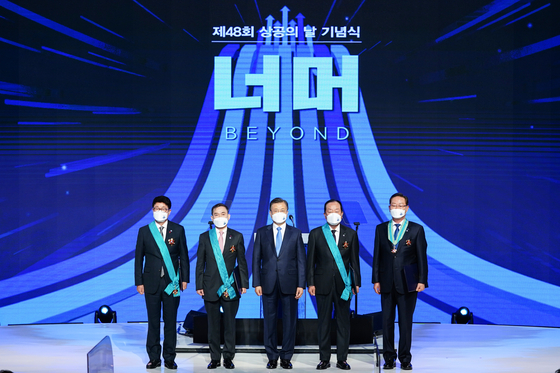 President Moon Jae-in, center, stands with the recipients of awards for advancing industries at the Korea Chamber of Commerce and Industry in central Seoul on Wednesday.[YONHAP]


President Moon Jae-in highlighted the significance of environmental, social and governance (ESG) factors in operating businesses during an event attended by leaders of large Korean companies on Wednesday.

The president also painted an optimistic picture of the Korean economy roaring back from the impact of the pandemic in line with the upward revision of economic growth forecasts by multiple institutions including the International Monetary Fund.

“Businessmen and merchants alike managed to protect our industries and trade,” Moon said during an event commemorating the 48th commerce and industry day at the office of Korea Chamber of Commerce and Industry (KCCI) in central Seoul.

“The economy is set to rebound,” he said.

The president upped the ante by suggesting that companies shift their priorities from growth to broader goals.

“We have achieved economic growth that other countries envy, but it is true that there are losses associated quick growth,” he continued, “The time is ripe to enter a new era where the focus switches towards non-financial results like ESG from short-term sales and profit.”

He cited the government’s push to achieve net neutral carbon emissions and Korean New Deal programs as examples of initiatives aligned with ESG.

Moon celebrated the inauguration of SK Chairman Chey Tae-won as the head of the KCCI, promising active communications with the business lobby.

“[I] hope the KCCI will become a sound communication channel between the government and corporations,” Moon noted.

Founded in 1884, the KCCI was established by the Chambers of Commerce and Industry Act while other lobbies like the Federation of Korean Industries (FKI) are private groups.

FKI has been excluded from gatherings and events held by the presidential office following a bribery scandal that claimed the Park Geun-hye government.

The president went on to send a congratulatory message to the newly-appointed vice chairmen at the KKCI, who are mostly the chiefs of tech companies.

Tech companies traditionally took a back seat at business lobbying groups in Korea, eclipsed by manufactures with longer corporate histories.

But with the inauguration of Chey, Kakao Chairman Kim Beom-su and NCSoft CEO Kim Taek-jin were named vice chairmen.

Moon also recognized those contributing to advancing certain industries, including LG U+ CEO and Vice Chairman Ha Hyun-hwoi, during the event.