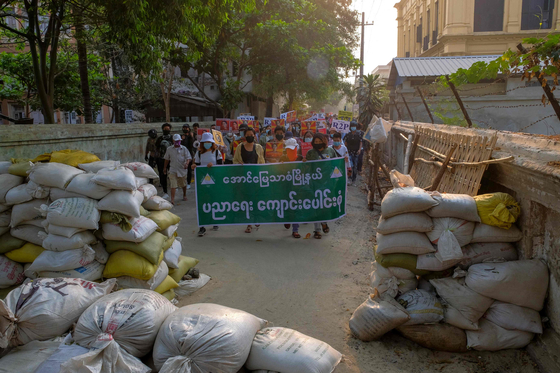 This photo received from an anonymous source via Facebook on April 1, 2021 shows protesters walking towards makeshift barricades while taking part in a demonstration against the military coup in Mandalay. [AFP]

Korean banks are looking for ways to keep their workers in Myanmar safe after a female staffer at Shinhan Bank’s Yangon branch was shot by armed forces during her commute home Wednesday.

Shinhan Bank confirmed Thursday the Burmese employee was shot in the head while traveling home from work on the corporate shuttle bus. She was brought to a nearby hospital and is being treated.

Why she was shot inside a company van is not clear.

The Ministry of Foreign Affairs said in a briefing Thursday that the employee was shot while the van was being inspected by military police in Myanmar. Nine Burmese employees were in the shuttle bus, the ministry said, and the other eight were unharmed.

“There have been no reported injuries of Korean nationals so far,” said Choi Young-sam, spokesman for the Korean Foreign Ministry, during the briefing.

Shinhan Bank said its Myanmar branch had already minimized operations after a recent military coup that has sparked protests, which have been brutally cracked down upon. It cut operating hours and employees were asked to work from home except for essential staff.

Shinhan Bank said it had to maintain a certain level of operations at its branch at the request of the Myanmar central bank.

While the branch had three Korean and 33 Burmese workers, the number of essential staff on site changed daily, the bank’s spokesperson said.

After the shooting, the bank declared a level three crisis management situation. Under level three, the branch will be temporarily closed and all employees will work from home. It is also reviewing bringing home Korean employees from Myanmar.

The bank said it has no plans to pull out of the country.

Other Korean banks in Myanmar announced safety plans for their employees.

KB Kookmin Bank said in a statement that all 38 workers at its Myanmar corporation, including four Korean workers, are working from home and that it is operating a hot line with it.

Woori Bank, which operates a wholly-owned corporation in Myanmar specializing in microfinance dubbed Woori Finance Myanmar, said only a minimum number of staff have been working in the office taking turns with most of its 506 employees working from home. Working hours have been shortened due to the danger of commuting at night. Four Koreans work at the company, and the bank is allowing family members of those staff to return to Korea if they want to.

State-owned banks also have footprints in Myanmar including the Korea Development Bank and Export-Import Bank of Korea.

Spokespersons for those banks said all of their workers in Myanmar are working from home and they are in touch with the Korean Embassy in Myanmar about their operations.

None of the banks have plans to withdraw from the country.

A spokesperson from a state-run bank told the Korea JoongAng Daily that the government would have to make a decision to pull out of Myanmar.