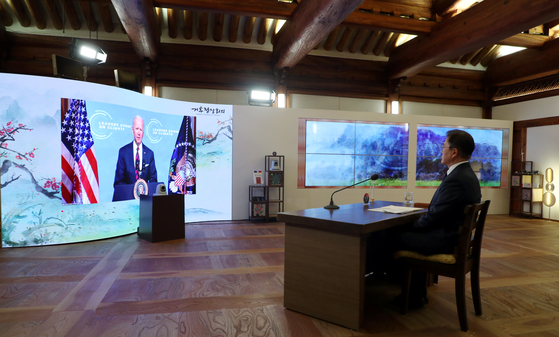 
An estimated 40 trillion-won ($35 billion) worth of investment in the United States is what President Moon Jae-in may offer U.S. president Joe Biden this week in exchange for a closer cooperation on vaccine supplies.

Korea’s major conglomerates – Samsung Electronics, Hyundai Motor -- and battery makers LG Energy Solution and SK Innovation have either confirmed or are expected to announce sizable investments in new factories on U.S. soil ahead of the first summit between the two leaders.

Executives from some of those groups – SK Group Chairman Chey Tae-won, Vice Chairman Kim Ki-nam from Samsung Electronics, LG Energy Solution CEO Kim Jong-hyun – will be in a delegation that accompanies Moon to Washington.

The primary player will be Samsung Electronics, unsurprisingly. It has already filed an investment plan worth $17 billion that involves expanding its existing chip plant in Austin, Texas with the state government.

A spokesperson for the chipmaker said that the negotiation is ongoing and nothing has been decided.
Samsung announced last week that it will spend 171 trillion won to ramp up production of microprocessors in Korea and possibly elsewhere by 2030, adding 38 trillion won more to a previous plan.

The spokesperson declined to comment whether that announcement includes the possible investment in Texas.

Their plan jibes with the Biden administration's aggressive push towards green mobility. He has proposed a $174 billion investment package to encourage Americans to switch to eco-friendly cars.

Seoul-based market tracker SNE Research estimates that the U.S. EV market will grow at an average annual rate of 40 percent through 2025, going from 1.1 million units this year to 4.2 million units in 2025.

“Hyundai and Kia will invest in growing their EV manufacturing footprint to scale up production and satisfy U.S. market demand,” the Korean carmaker said in a release May 14. “Hyundai Motor will offer a suite of American-made electric vehicles to U.S. consumers starting next year.”

No further details have been leaked on how Hyundai Motor and Kia will expand its production facilities in the U.S., but industry insiders speculate that production of the Ioniq 5 will be expanded to Hyundai Motor’s Alabama factory from next year. The Ioniq 5 is currently manufactured at Hyundai Motor's Ulsan factory.

“Production of internal combustion engine sedans at the Alabama and Georgia factories is likely to be moved to Kia’s Mexico factory and the vacancy will be filled with production of new EV models and other pick-up trucks and SUV models as well,” said Kim Jin-woo, an auto analyst from Korea Investment & Securities.

“Only 40 percent of Hyundai and Kia’s U.S. sales are produced locally at the moment so expanding U.S. facilities is a natural thing.”

LG Energy Solution, the world's second-biggest lithium-ion battery producer for EVs, pledged 5 trillion won investment through 2025 in the U.S. earlier this year to build at least two battery factories. In addition, through a 50-50 joint venture with Detroit-based auto giant General Motors, the Korean battery company is building two battery manufacturing facilities in Ohio and Tennessee, each worth $2.3 billion.