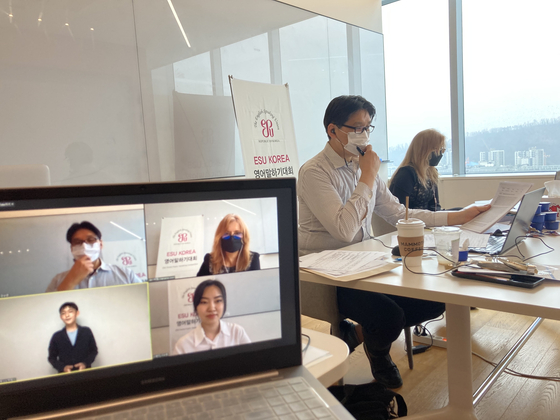 
The winners of the 20th English-Speaking Union (ESU) Korea Public Speaking Competition were announced March 30 after a selection process which lasted four months.

The contest, normally held twice a year by the Korea JoongAng Daily in a large auditorium, was moved entirely online this year in order to prevent any possible transmission of the virus.

Contestants gave their presentations over Zoom, with only the panel of judges physically attending together in a conference room at the JoongAng Ilbo’s headquarters in Sangam-dong, western Seoul.

A total of 123 finalists were narrowed down from some 1,000 who signed up for the 20th ESU competition, sponsored this year by HSBC Korea. There were four different categories based on the students’ age: Lower-level elementary from grades one to three, upper-level elementary from grades four to six, middle school and high school. Thirty to 32 finalists were chosen in each group.

The finalists called in via Zoom over two days, March 20 and March 27, on staggered schedules in groups of 10, with three groups per age category. Each finalist was allotted four to five minutes to deliver their speeches, after which they were asked questions and evaluated by a panel.

The competition was broadcast live on YouTube, with only finalists and judges allowed into the Zoom meeting. Prizewinners’ speeches are due to be posted to YouTube.