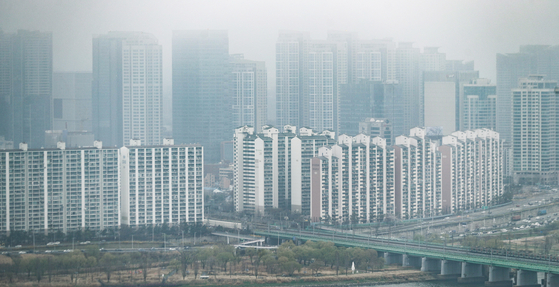 View of apartments in Seoul in March 2021. Because of the rise in the assessed value of apartments, some older people face larger health insurance bills. [YONHAP]

The rapid rise in the assessed value of properties is having a tremendous knock-on effect that is devastating for some.

According to National Health Insurance rules, a person can no longer be a dependent and on the policy of another person if the value of their property breaks a certain threshold, so those with properties that increase in assessed value are sometimes forced to pay their own insurance premiums.

This wrinkle in the rule is becoming more of a problem as the government has been driving up assessed values and the threshold for losing coverage has been lowered.

The assessed value of properties will rise this year on average by 19 percent after years of rising by about 5 percent.

Until 2018, those with properties assessed at more than 900 million won would lose their status as a dependent and have to become a "regional subscriber," paying about 110,000 won per month per person for health coverage.

According to one posting on the Blue House petition site, one elderly couple had to pay 220,000 won a month after the assessed value of their property broke 900 million won and they were forced off of the policy of a child.

The assessed value of their property doubled under the current administration, the anonymous post claimed.

"The government is responsible for the rise in real estate prices," the writer posted. "The various regulations that ignored free market principles and blocked supply drove up the prices."

The person added that their only crime is living in the same apartment.

According to the National Health Insurance Services, last year 19,045 people were recategorized as regional subscribers due to the rise in the assessed value of property.

The government estimates that 18,000 people will be recategorized this year, while private forecasts suggest more will be dumped.

People aged 60 or above are 29 percent of all those claiming dependent status, so older residents could be hard hit, while women are 1.7 times more likely than men to be dependents.