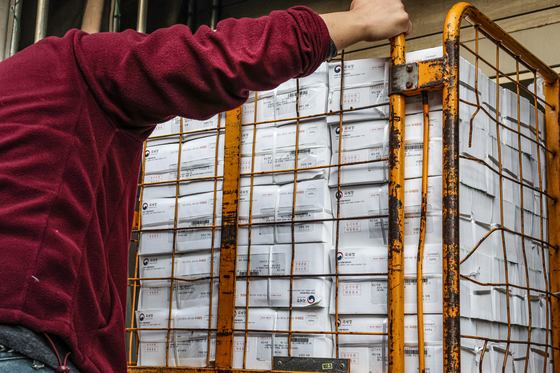 Nearly a million people received comprehensive real estate holding tax bills this year, and it's going to cost them plenty.

The real estate boom has helped jack up the tax bills.

The comprehensive real estate holding tax is a national tax targeting expensive residential real estate and some kinds of land. It is separate from property taxes levied by local governments.

Rising prices of apartments is one reason for bigger tax bills, but also a change in the way the government assesses real estate values and the tax rates themselves.

This year, the assessed value has been raised to 70 percent of the market value. In 2020, it was 69 percent.

The Moon Jae-in administration has been raising that ratio since it took office. At that time it was 65.6 percent.

The rates for the comprehensive real estate holding tax were also raised this year.

The maximum rate was raised from 2.7 percent to 3 percent for single homeowners and from 3.2 percent to 6 percent for owners of more than one residence. It is a sliding rate depending on the assessed value.

According to Shinhan Bank estimates, the owner of a 84 square-meter apartment in Banpo is liable for a comprehensive real estate holding tax bill of 9.9 million won this year, 70 percent higher than last year’s 5.9 million.

For a person who owns two 84 square-meter apartments in Banpo, the tax bill will have increased nearly 160 percent to over 80 million won.

Property owners are squawking, some claiming their tax bills have more than quadrupled.

“All I did was buy a single apartment and now I am penalized for that?” claimed a homeowner in Jamsil, Seoul, who posted on an only neighborhood bulletin board.

“Do I have to find second job just to pay off my taxes?” wrote another.

The comprehensive real estate holding tax was first adopted in 2005 by the Roh Moo-hyun administration.

This year, the Democratic Party raised the threshold for single home owners from 900 million won to 1.1 billion won. So the number of single home owners slapped with the tax did not grow significantly. It went from 120,000 last year to 132,000 this year, a mere 10 percent increase.

The Finance Ministry stressed that the tax only affects 2 percent of the population.

“Among those that will be receiving the comprehensive tax bill, 485,000 are those that own multiple housing units and 62,000 are in the [housing rental] businesses,” Finance Minister Hong Nam-ki said on Monday.

He said the taxes collected will be used in regions outside the greater Seoul area to balance national development.