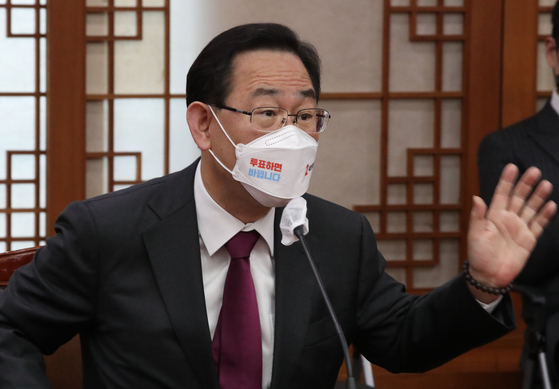 Rep. Joo Ho-young, floor leader of the main opposition People Power Party, complains Monday about the National Election Commission's recent decisions during his visit to the watchdog. Joo and other opposition members visited the election commission to protest that it is managing the by-elections unfairly. [NEWS1]


The main opposition People Power Party (PPP) on Monday questioned the integrity of the National Election Commission (NEC), criticizing the election watchdog for defending the ruling party ahead of this week’s by-elections.

“I have serious doubts that the NEC is serving as a neutral and independent organ as stipulated in the Constitution,” said Kim Chong-in, acting chairman of the PPP, in the morning. “The NEC must think of the consequences if it fails to observe its neutrality and independence.” 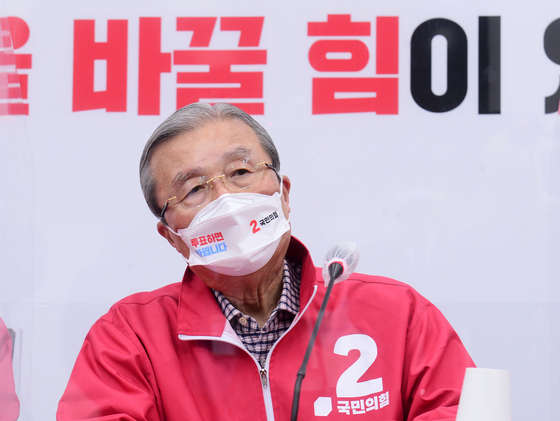 
Kim was responding to the NEC’s recent decision to not allow the PPP to use certain expressions on its campaign banners. On Wednesday, Seoul and Busan will hold mayoral elections, and candidates of the ruling Democratic Party (DP) and PPP are running against each other in both races.

According to the PPP, the NEC recently banned the party from using three particular phrases in its banners intended to encourage voters to participate in the by-elections. The watchdog said the PPP must not use the words or expressions “hypocrisy,” “incompetence” or “naeronambul,” a Korean phrase referring to having double standards, which could be literally translated to “If I do it, it’s romance, but if someone else does it, it’s cheating.”

The NEC said the PPP must not use the three phrases because they can be easily seen as a reference to a particular political party, the PPP said.

The PPP responded cynically to the NEC’s decision. “The NEC essentially certified that the DP is a political party of hypocrisy, incompetence and double standards,” said Kim Ye-ryeong, spokeswoman of the PPP.

Rep. Cho Su-jin, spokeswoman of the PPP’s Seoul mayoral candidate Oh Se-hoon, also said she is thankful for NEC’s decision because it told voters that the DP is a party of double standards. Oh, a former two-term Seoul mayor, is running against Park Young-sun of the DP to win back his job a decade later. 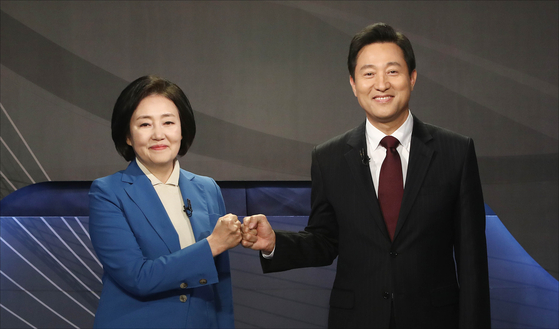 Park Young-sun, Seoul mayoral candidate of the ruling Democratic Party, left, and Oh Se-hoon, candidate of the People Power Party, attend a debate hosted by the Korea Broadcasting Journalists Club on Monday. The event was the final debate before Wednesday's by-election. [NEWS1]


Rep. Joo Ho-young, floor leader of the PPP, said Monday the voters are enraged by the NEC’s behavior. He said the election watchdog already lost its impartiality when it dismissed the PPP’s complaint that President Moon Jae-in had violated his political neutrality by attending events touting Busan’s future as a megacity and promising support for a new airport in February.

Following Moon’s high-profile visit to Busan on Feb. 25, the PPP cried foul and asked the NEC to rule on its legality just a few weeks before a crucial mayoral by-election in Busan. The NEC ruled in March that Moon had not violated political neutrality.

“The NEC is supposed to manage the fairness of an election, but it is actually participating in the ruling party’s campaign,” Joo said.

Joo also complained that the NEC has allowed the pro-administration civic groups’ campaigns to blacklist opposition candidates, but banned campaigns by women’s groups to remind the public why the mayoral by-elections are taking place in Seoul and Busan — the mayoral seats were both vacated last year as a result of sexual harassment allegations against their incumbents, both DP politicians.

Later in the day, Joo and other PPP members paid a visit to the NEC and met with its leaders to complain about the watchdog’s unfairness.

The PPP also criticized the NEC for issuing no more than a slap on the wrist to a DP lawmaker who is a close associate of Moon, even though he had overtly broken the election law.

The Seoul Metropolitan Election Commission said it sent an administrative notice to the lawmaker, Rep. Youn Kun-young, on Sunday, urging him to respect the election law.

During his interview with YTN radio on March 29, Youn said the party and Park's campaign committee conducted multiple opinion polls and the gap between the PPP’s Oh and the DP’s Park have narrowed from double digits to single digits, indicating that Park is catching up with Oh's lead.

Youn’s remark was a clear violation of the Public Official Election Act, an election watchdog official told the JoongAng Ilbo. Clause 12 of Article 108 of the act said no person shall publish or report the result of a public opinion poll conducted by a candidate or a political party relating to an election by the closing time of polls of the relevant election day.

The watchdog decided to issue an administrative notice to Youn, the lightest punishment possible, because the lawmaker appeared to have no intention to violate the law.

Former DP chairman Lee Hae-chan also made a similar remark on Thursday during a TBS radio interview by mentioning the party’s internal poll outcomes. A review is still being conducted on Lee’s remarks, the Seoul Metropolitan Election Commission said.

Meanwhile, the average turnout for the early voting period on Friday and Saturday was 20.54 percent, the highest ever in the history of a by-election. Seoul’s turnout was 21.95 percent and Busan 18.65 percent.