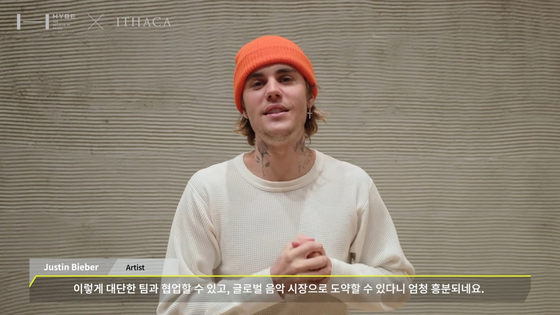 
Canadian singer Justin Bieber, along with other pop acts, expressed their excitement to become part of HYBE, the company that manages K-pop boy band BTS.

HYBE announced on Friday that it acquired Ithaca Holdings, the company behind pop stars such as Bieber, Ariana Grande, J Balvin and Demi Lovato.

In a video uploaded on HYBE’s YouTube channel on Monday, Bieber congratulated the “historic partnership” between the two firms.

“The prospects of working together with these amazing teams and stepping further into the global music scene is very exciting,” he said.

Other pop stars under the two firms also appeared in the video, as well as Chairman Bang Si-Hyuk of HYBE and Chairman Scooter Braun of Ithaca Holdings.

“One thing that HYBE and Ithaca Holdings have in common is that they began with nothing but a dream and grew into world-leading companies,” Bang said.

“I believe that the possibilities for this partnership are truly limitless [...] This will be the first time their groundbreaking systems and curation will be integrated in the U.S. market at the onset of an artist’s career,” said Braun.

“Congratulations Chairman Bang and Scooter for bringing the Ithaca and HYBE family together worldwide,” said Lovato.

“We can’t wait to see the endless possibilities that await us. I hope we can grow and share positive influence with all the artists that have become a part of our new family. And most of all, we hope this new adventure will give fans a fresh experience and be a source of new joy,” said members of BTS.