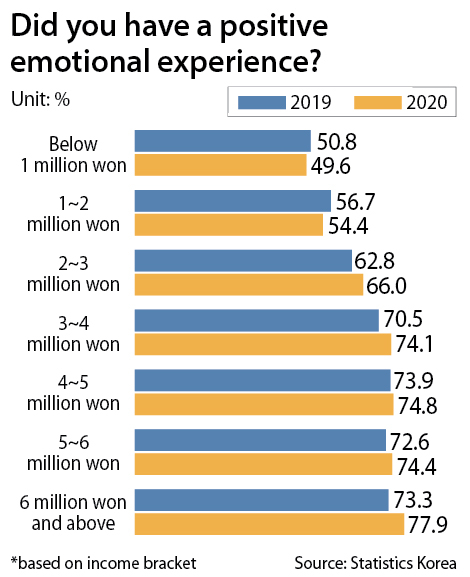 Koreans were on average more satisfied with life in 2020 than in 2019, but the figures show that money is increasingly important in ensuring happiness.

According to a Statistics Korea study, 61.6 percent of Koreans say they were happy with life in 2020, a 0.9 percentage point increase from 2019. But a closer look at the figures show that income directly impacted happiness last year.

This divide was even clearer when it came to positive emotional experiences.

Experts say economic situation is currently the biggest contributing factor to the widening gap between those that are economically stable and those that aren't, even though economic wealth does not necessarily directly translate to personal happiness.

The economic impact of the Covid-19 pandemic had a major influence on the way people felt about their quality of life.

"Those in the middle and upper class were able to maintain their income amid the pandemic but those of the lower income class that were directly hit by Covid-19 weren't able to consume as they did as they either lost their jobs or saw their paycheck being cut," said Kang Sung-jin, a professor at Korea University’s Department of Economics. “As they became [economically] limited, they no longer had the leisure to spend on cultural experiences or self improvement, hobbies, sport and on their health, making their satisfaction with life decline."

The gap has also grown when it comes to health conditions.

Those that made more than 7 million won a month in monthly income topped the list among all income groups that answered that their health has improved since the outbreak, at 27.7 percent.

On the opposite end of the spectrum, those that made less than 2 million won a month topped the list among those that said their health worsened, at 20.5 percent.

The biggest reason for the difference between the two groups was vivid in their spending on health related expenses.

Excluding the cost of buying masks, a staple during the pandemic, spending on health and medical services by the bottom 20 percent is likely unchanged.

“The price of daily necessities is rising amid the pandemic,” said Kang. “Low income households will continue to cut their spending until the Covid-19 outbreak settles.”