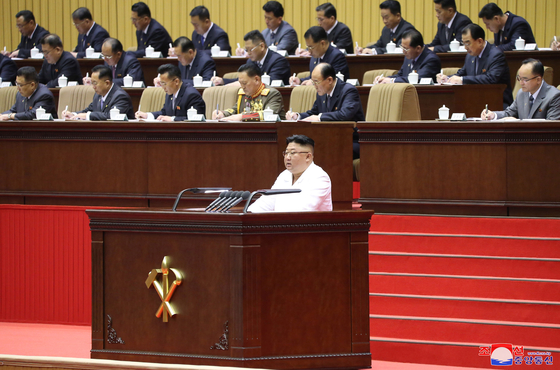 North Korean leader Kim Jong-un speaks at the 6th Conference of Cell Secretaries of the Workers' Party of Korea in Pyongyang on Tuesday, in a photo released by the North's official Korean Central News Agency Wednesday. [YONHAP]

Kim called to correct the "shortcomings" in the "party cells," the lowest-level organizational unit of the Workers' Party, during his opening speech at the sixth conference of cell secretaries Tuesday in Pyongyang, reported to the North's official Korean Central News Agency (KCNA). He said this will contribute to the “healthy and sustainable development” of the party.

He stressed the importance of economic development and improving people's living standards “even in the worst-ever situation,” referring to the global Covid-19 pandemic, while emphasizing the role that the grassroots organizations of the party will play in such efforts “to overcome unprecedentedly numerous challenges.”

A party cell, led by a cell secretary, is comprised of five to 30 members, and carries out the party’s key aims and implements its decisions as the most fundamental unit.

The party cell conference is the third of its kind since Kim took office in 2011. Kim previously attended cell secretaries’ conferences in 2013 and 2017.

Kim stressed that the success of the policies made at the key Workers’ Party congress in January depends on the efforts of the cells and its secretaries in implementing a “new strategic line” to advance socialist construction.

The KCNA reported that the conference “was convened at a crucial time in strengthening our Party and developing the revolution” and “will be a significant occasion to strengthen the Party's leadership” under General Secretary Kim Jong-un.

Kim said that the cells “should be the first movers in actively sweeping away anti- and non-socialist practices and launch an intensive drive for establishing moral discipline,” reported the KCNA, as the party moves to strengthen its ideology.

Kim made a rare admittance of failure in North Korea’s previous economic development plan and announced a new five-year plan in the eighth party congress in January. North Korea stressed it will focus on building internal stability and strengthen solidarity, while it will continue to advance its nuclear power.

North Korea’s economy has suffered after shutting down its borders with China, its biggest trading partner, in early 2020, and from years of stringent United Nations and unilateral sanctions on the country meant to curb its nuclear and ballistic missiles programs.

Jo Yong-won, a member of the powerful Presidium of the Political Bureau, the party’s top policymaking body, and secretary for organizational affairs of the Workers’ Party’s Central Committee, was reported to have pointed out mistakes by party cells that “did not meet the Party's intention and the demands, and warned that there would be “very serious” consequences. Jo is believed to be a top aide to Kim, presumed to have been promoted to the No. 3 position in North Korea since the January party congress.

Jo added that leader Kim “has ushered in a brilliant golden age in strengthening the entire Party.”