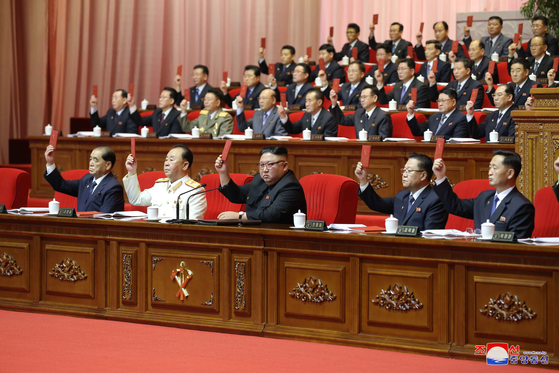 North Korean leader Kim Jong-un, third from left, and other top officials hold up their Workers' Party certificates on the fifth day of the 8th Party Congress on Saturday, in this state media photograph from Sunday. [YONHAP]


North Korea officially tweaked the rules of its ruling Workers' Party to refer to powerful defense capabilities for its security, state media reported Sunday, codifying a declaration by its leader Kim Jong-un a day earlier vowing to expand his nuclear arsenal.

Calling the United States the North's "foremost principal enemy," Kim concluded his dayslong report to the 8th Party Congress on Friday by swearing off any talks with Washington until the new occupant of the White House withdrew a "hostile policy" toward Pyongyang.

Setting a range of objectives for its nuclear weapons industry, including enhancing the accuracy of its intercontinental ballistic missiles (ICBM), Kim warned he was compelled to continue augmenting the regime's nuclear arsenal "without interruption."

The declarations marked an emphatic first response by the regime to the incoming Joe Biden administration, coming after silence since U.S. electors in November voted the incumbent and Kim's self-styled "good friend" Donald Trump out of office.

Whoever takes office in the United States, "the real intention of its policy toward" North Korea "will never change," Kim said in a glum assessment of his regime's negotiating possibilities with Washington. Claiming U.S. policy toward the North is becoming "more violent" in spite of his goodwill, Kim vowed to answer force from Washington "with toughness and good faith in kind."

This, the dictator affirmed, would be done through the country's impressive array of nuclear and conventional weapons, which now include a new nuclear-powered submarine "in the stage of final examination," as well as a "new type gigantic rocket" mounted on an "11-axis self-propelled launcher" shown at a military parade last year. 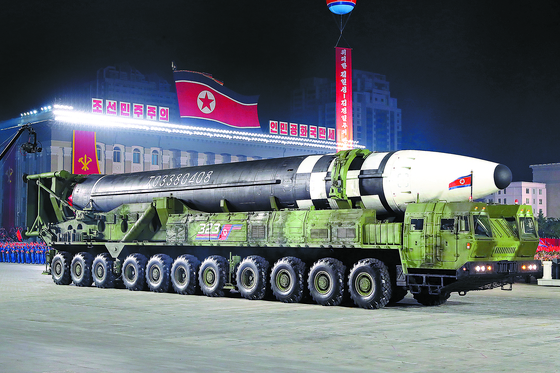 A new form of an intercontinental ballistic missile shown off on an 11-axle launcher by North Korea during a military parade in October. Kim mentioned the missile among several other new weapons as examples of some of the newest additions to the regime's arsenal aimed at deterring foreign aggression. [NEWS1]

One "super-large" multiple rocket launcher system was characterized by Kim as "a super-power attack weapon never to be seen in the world history of weapons," part of a series of "ultra-modern" arms that he claimed enabled the regime to "seize a creditable edge in military technology."

Kim praised his government for great results in developing its nuclear force since the successful test launch of the Hwasong-15 ICBM in November 2017, including progress in developing a host of submarine and ground-launched ballistic missiles, miniaturizing warheads as well as creating a "super-large hydrogen bomb."

With this, he called for a "great revolutionary turn" by setting new goals to modernize North Korea's nuclear arms. Notable among the targets Kim outlined was a goal to "improve the capabilities of pre-emptive and retaliatory strike of nuclear forces" by raising hit rates for objects within 15,000 kilometers (9,321 miles) — which would include the Pacific Ocean and the entire continental United States.

Building an "underwater-launch nuclear strategic weapon" and developing an ICBM to fit the purposes of use underwater or on the ground were also named as key priorities.

Kim, however, swore he "would not misapply the nuclear weapon unless the aggressive hostile forces try to use their nuclear" weapons against North Korea, in line with Pyongyang's commitment to be a "responsible nuclear weapons state."

This deterrence argument has long been used by the North to justify its proliferation of nuclear arms, raised in response to what it sees as an existential threat posed by the United States.

The dictator's aggressive posture toward Washington in his speech — which analysts say is a message to the incoming Biden administration — highlighted just how far relations have fallen since his first meeting with Trump in Singapore in June 2018.

Trump had no qualms about touting his deep personal chemistry with the North Korean leader — once musing that they "fell in love" through correspondence — but when it came to a practical agreement, his administration refused to oblige Pyongyang with any economic concessions without the latter taking major steps toward denuclearization first.

That disagreement doomed the two leaders' summit at Hanoi, Vietnam, last February. Talks never formally ended, but Biden's victory in November diminished the likelihood of Kim receiving another high-profile meeting with an American president without relinquishing his nukes.

Kim in his address also had a message for South Korea, where the administration is eager for dialogue. Seoul bore the brunt of Pyongyang's frustration over the failure of nuclear talks last year when it abruptly demolished the two countries' joint liaison office in Kaesong.

Calling inter-Korean relations in a "deadlock" due to what he claimed were "hostile military acts" by the South, Kim said ties could only improve based on "how [the South's authorities] respond to our demand and how much effort they make to fulfill" inter-Korean agreements.

In particular, Kim appear to scoff at Seoul's sanction immune offers to conduct exchanges on antiepidemic and humanitarian issues or pursue individual tourism, calling them "inessential," lambasting the South for strengthening its military and holding joint military drills with the United States.

"A new road toward improvement of the North-South relations based on firm trust and reconciliation can be paved only when the South Korean authorities strictly control and root out any abnormal antireunification conducts," Kim said, according to the KCNA.

"Whether the North-South relations can be restored and invigorated or not entirely depends on the attitude of the South Korean authorities and they will receive as much as they pay and try."

Seoul's Ministry of Unification issued a prompt reply to Kim's remarks, noting South Korea remained determined to carry out inter-Korean agreements and that it hoped the two Koreas can return to talks. 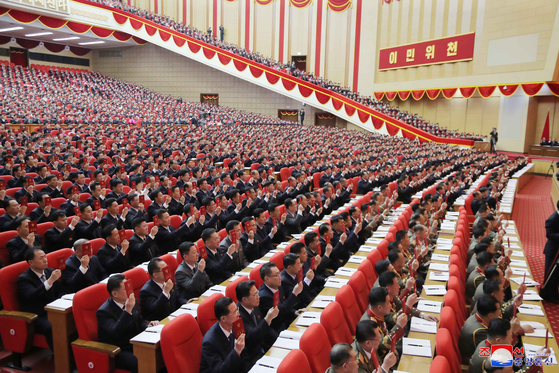 North Korean delegates attending the fifth day of the 8th Party Congress on Saturday, in this state media photograph from Sunday. [YONHAP]


The 8th congress, which kicked off Tuesday, carried on into the weekend for its fifth day on Saturday, at a session that involved major revisions to party rules, KCNA reported.

Words stressing the importance of defense capabilities to the country's self-preservation were enshrined in the party's charter, while more clearly defining the ideology of "Kimilsungism-Kimjongilism" — named after the regime's two former leaders.

Other major changes included a reversion of the party's executive policy council into a secretariat, as it was in 2016, and turning national party congresses into regular events held at five-year intervals.

This year's party congress came only four years after the 7th Congress in 2016. That event was the first in 36 years.

As the country's biggest political event, the congress was also much anticipated this year in light of the damage suffered by North Korea's economy in 2020, when it was hit with a trifecta of disasters in ongoing international sanctions, Covid-19 and several natural disasters over the summer.

With Kim himself having admitted failure at the opening of the congress on Tuesday, the event's last days are likely to be devoted to the unveiling of a new five-year development plan.