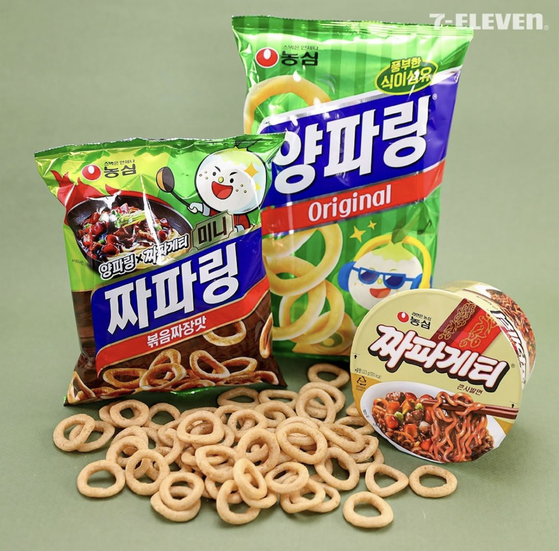 Nongshim put together flavors of its two products to make an onion snack that tastes like its instant noodle Jjapagetti. [NONGSHIM]


Snacks popular with consumers are being reimagined in a bid to gain new fans and earn viral fame. Local food companies are collaborating with each other to create fun new flavors for consumers to try.

Nongshim, one of the largest food companies in Korea, has decided to mix and match flavors of its own products. Instant noodle Jjapagetti, which earned global fame thanks to the award-winning Korean film “Parasite” in which the noodles featured as part of a recipe, has been combined with Onion Rings, also known by their Korean name Yangparing. Titled Jjaparing, the new snack takes the form of the original Onion Rings but are darker in color and flavored like the Jjapagetti sauce, which is made with onions.

“Both are some of the major items that represent the company, which have been in the market for almost 40 years,” said Nongshim on its official blog. Jjapagetti was first released in 1984 while Onion Rings were released in 1983. “Since Jjapagetti has been gaining more popularity online, we expect this particular snack will elicit curiosity from teenagers and those in their 20s.”

Lotte Confectionery takes flavors found in common Korean food and combines them with different varieties of its steady-selling ice cream. For example, its Chaltteok Ice mixes the flavors of tteokbokki and cheese to make a mochi-like ice cream with a spicier and more savory flavor profile.

While Nongshim is finding ways to mix and match its own products and Lotte looking elsewhere for inspiration, Ottogi and Binggrae have decided to join forces. Binggrae’s crab-flavored snack Ggotgerang, also known as Crab Chips, has been made into a variation of instant cup noodles. Given that broth boiled with crabs is often used to make noodle dishes in both Western and Eastern cuisine, the flavor of the snack made an ideal addition to the cup noodles named Ggotgerangmyeon.

Meanwhile, Ottogi’s Chamggae Ramyeon or Sesame Ramyeon has been combined with Binggrae’s snack Yachae Time, or Vegetable Time. The particular snack comes with a dipping sauce made with jalapeno and mayonnaise to bring out the spicy and sesame flavors of the noodles. 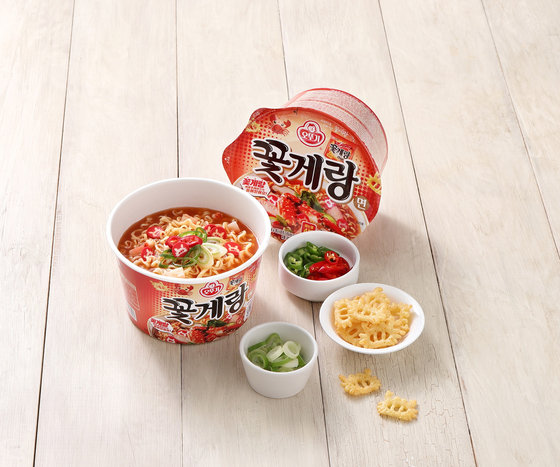 Binggrae’s crab-flavored snack Ggotgerang is made into noodles by Ottogi. [OTTOGI]


It's not just factory-made snacks that are being used in for collaborations. Fried chicken franchise Kyochon has joined hands with CJ Foodville’s bakery Tous Les Jours. Kyochon, known for its spicy red sauce and ganjang (soy sauce) based so-called “original” sauce, has used these two flavors and unveiled five different products to be sold at Tous Les Jours; two chicken croquettes made with two of the signature flavors from Kyochon; two sandwiches with Kyochon sauces; and a salad.

After their release last month, over 200,000 of collaborated items were sold in the first week. The bakery said it takes only about 30 minutes for all the prepared items to be completely sold out each day and expect sales to hit one million within a month. Positive reviews say the items taste exactly like Kyochon's fried chicken.

Convenience stores are on the frontline for people looking to grab a quick snack and aim to stock eye-catching items in order to boost sales. Snack collaborations have become more popular since Daehan Flour featured the logo of its flour brand Gompyo on many different items. The Gompyo logo features on snacks and drinks like nachos, popcorn, gummies, ice cream, makgeolli (fermented rice drink) and beer. 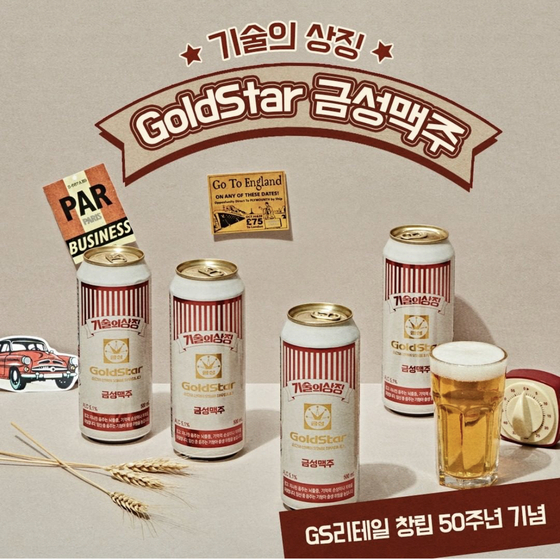 
GS Retail has also collaborated with Jeju Beer Company to reflect the ongoing retro trend in its selection of beer. To celebrate the company’s 50 years in business, it has brought back the brand name Gold Star and the logo to create a sense of nostalgia for consumers.

Food company Chungjungone has worked with convenience stores to offer popcorn that is packaged to looking like the brand's MatSoGeum salt.

And it's not just food items jumping on the collaboration trend.

GS25 has collaborated stationery brand Monami to present a carbonated drink, the packaging of which takes inspiration from the company's marker pens. The red colored  bottle contains melon-flavored drink while the black one is lemon-flavored.

Competitor 7-Eleven added its own stationary-inspired snack item to its shelves. Amos Glue Sticks, often used at schools, are the inspiration for packaging of a new candy. 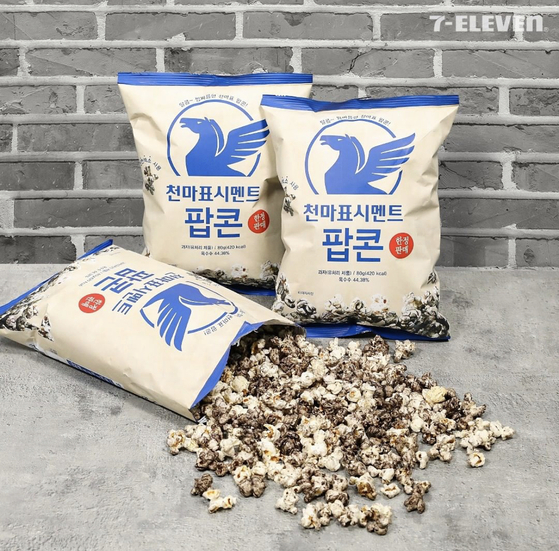 7-Eleven presents popcorn in a package that looks like a miniature version of a cement bag. [7-ELEVEN]


7-Eleven also collaborated with Sungshin Cement, known for its Cheonmapyo brand which features a logo with a horse, to present popcorn. The package looks like the miniature version of the real cement bag and inside the snack has been colored grey.

Considering the popularity of such stationary and construction themed items, worries have arisen about young children mistaking real items as snacks.