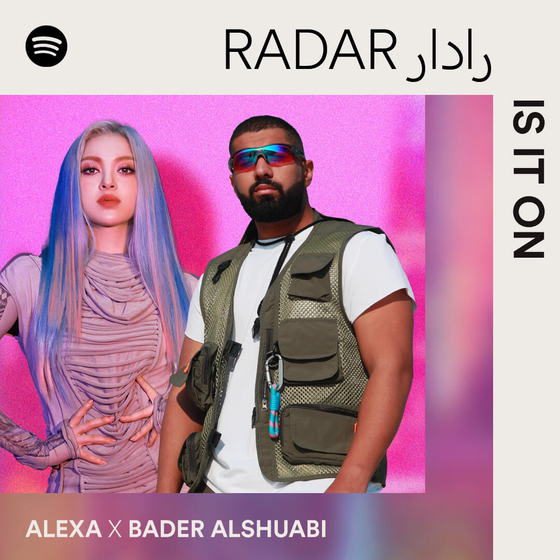 
K-pop singer AlexA will join forces with Kuwaiti-Saudi singer Bader AlShuaibi for a collaboration as a part of global music streaming service Spotify's Radar project series, dropping track "Is It On" on May 21.

Spotify's Radar project is a global artist program "exclusively designed to help emerging artists around the world reach the next stage in their careers and strengthen their connection to listeners," according to Spotify.

The service provides artists that take part in the Radar project with the support and resources they need to market and promote their tracks. AleXa is the first artist to be chosen for Radar Korea, which kicked off in August last year.

Bader AlShuaibi is a rising star in Kuwait and the Middle East, who has been chosen from Spotify's pool of artists from Radar MENA (Middle East and North Africa) as the "future of Arabic Pop," according to Spotify.

Spotify saw a 140 percent increase in K-pop consumption year on year from January 2020 to January 2021 in the Middle East and North Africa, explaining the reason behind the choice of the two artists.

"Spotify has been preparing for the Radar collaboration for over a year," the service said, explaining that although it oversaw the project and covered the production and promotion costs, both artists' labels will take full ownership of the track.

Spotify also placed a billboard in New York's Times Square as well as provided media support to maximize exposure of the collaboration.

“I’m so grateful for this collaboration. It’s a fresh, never-heard-before mix of cultures and sounds. I really can’t wait for our fans all over the world to hear this track,” said AleXa.

“It’s 2021, we barely see any borders between cultures or people. This project is the child of globalization and my personal love for Korean Pop culture. AleXa is an extremely talented artist and together I believe we created the coolest cross-cultural collaboration, ever,” said Bader.

“In testament to the global impact of K-pop, our team has dedicated a lot of time and resources into making the first RADAR collaboration featuring a K-pop artist come true” said Andy Sloan-Vincent, Spotify’s Head of Global Music Programs who oversees RADAR programs globally.

“Music has no borders. Spotify will continue to enable cross-collaboration of rising artists from different regions, helping to connect K-pop with the world in creative ways.”