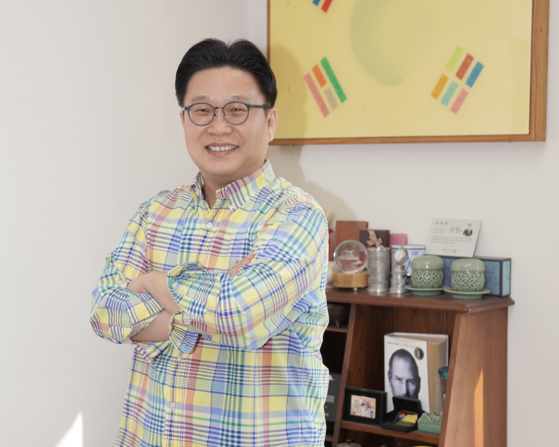 Seo Kyoung-duk, a professor of general education at Sungshin Women’s University. Seo has been actively working to promote Korea and Korean culture overseas for over 25 years. [JEON TAE-GYU]

In the New York Times and its international edition on Jan. 18, an ad ran with the title of "Korea's Kimchi, It's for Everyone."

It was placed by Seo Kyoung-duk, a professor of general education at Sungshin Women's University, to promote Korea as the true home of kimchi.

The advertisement came after the recent feud over the origins of the spicy and fermented napa cabbage dish.

It all got started when the Global Times, a Chinese propaganda newspaper, reported that China had set an "industry benchmark" for "the kimchi industry led by China," after the International Organization for Standarzation (ISO) published ISO 24220, the specifications and test methods for pao cai.

The article was titled: "China sets the international standard of kimchi; Korea, its sovereign country, gets insulted."

Pao cai is pickled vegetables, and the ISO has made it clear that the standard issued is not related to kimchi.

Li Ziqi, a YouTuber with nearly 15 million subscribers, in early January uploaded a video of herself making what appears to be kimchi with the hashtags #ChineseCusine and #ChineseFood. Baidu, China's largest portal, describes kimchi as originating from China. 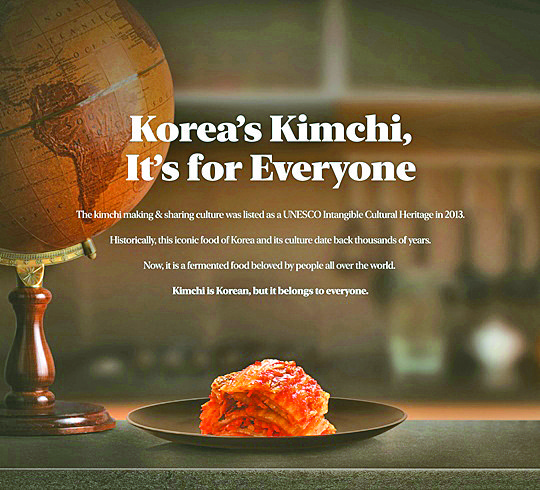 The half-page advertisement that Seo placed in The New York Times and its international edition on Jan. 18 as part of efforts to promote kimchi. [SEO KYOUNG-DUK]


Koreans were further angered when Baidu described of samgyetang, Korea's traditional chicken soup with ginseng, as having a long cultural heritage in China and originating in Guangdong Provence.

For samgyetang, Korea uses the Harmonized System (HS) code of 1602.32.1010. China does not have an HS code for samgyetang.

Seo has been actively working as a promoter of Korea for over two decades. He inserted advertisements in many big international media outlets, including The New York Times, The Wall Street Journal and The Washington Post.

Seo teamed up with boy band Monsta X last year to film and release an online video series on YouTube aimed at promoting treasured Korean cultural heritage overseas. In March, Seo partnered with actor Song Hye-gyo to make leaflets both in Korean and English about Korean history to spread the information globally. The two have been doing this for the past 10 years.

Seo sat down with the Korea JoongAng Daily on April 8 to talk about the recent claims by Korea and China and his journey as a promoter of Korea.


Q. How did you become a promoter of Korea?

A. Back when I was a high school student, I had learned that Korea was the 11th largest economy in the world and a country that achieved successful economic growth. I thought people around the world would by then have recognized Korea.

But when I visited Europe during my university years, people there asked me if I was Chinese or Japanese and never even asked if I was Korean. I was shocked that Korea and our country's culture were so unrecognizable to people overseas. But it's neither Korean's fault, or the fault of Korean companies or the press. I thought it was essential something be done in the private sector. Then I made up my mind to promote Korea, and it's already been over 25 years now.


You've sent an email to Baidu and requested it remove the explanation of kimchi. I heard you sent another email regarding the samgyetang issue. Have you received any response?

No, I haven’t received a reply yet.

In the case of kimchi, I sent Baidu a request email as soon as I figured out that the portal site describes kimchi as food that originated from China. And the description was actually removed from Baidu just few hours after my email. But then the portal made a similar description of kimchi again and then actually locked it so that other people cannot change the description or send a change request.

This proves that China itself is not confident and has no evidence to support claims to Korean cultural heritage including kimchi and samgyetang. The portal describes those foods originating from China but offers no details on how and when they were first made. This is also why it is essential that we continuously request them to change the false information until those can be fixed. 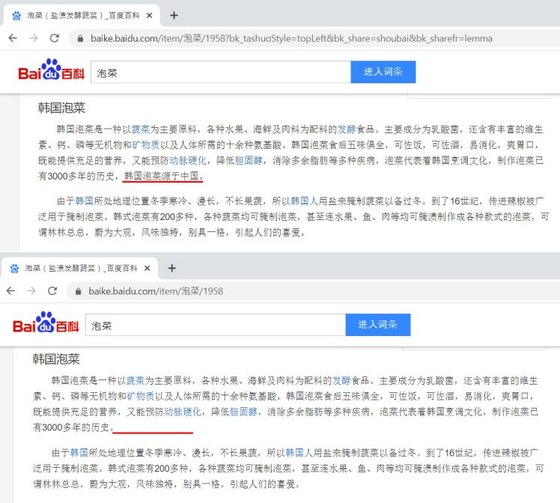 From top, Baidu, China's largest portal, describes of kimchi as originating from China. The description has been deleted after Seo sent an email to the portal site. [SEO KYOUNG-DUK]


Why does China continue making such claims?

China is anxious about losing its position in the world market. It's an attempt to keep its grip on the global market.

In the past, people in foreign countries immediately thought of China when they thought of Asia or Asian culture. But as Korea's culture such as K-pop, K-drama and K-movie have been gaining worldwide popularity, the first thing that pops into their heads when they think of Asia now is Korea. Asian culture is now largely led by Korea, and Chinese people are also aware this. I think China wishes to uphold its position in the world market and has been expressing patriotic sentiments in the wrong ways.

Also, since the coronavirus emergence, so many people around the world are now showing interest in taking good care of their health, especially their immunity. Kimchi definitively helps and there are many articles and scientific evidence that kimchi is good for improving immunity. As it's true that a large quantity of kimchi exported to world market is produced in China, China is taking the opportunity to cash in and achieve financial gains through kimchi.


TvN drama "Vincenzo" and SBS's "Joseon Exorcist" are recently at the center of a storm for depicting bibimbap with packaging mostly written in Chinese due to a product placement deal with Chinese company and for depicting a Joseon Dynasty prince treating a Catholic priest to Chinese dishes. What's your stance?

The Korean public is not angry about the fact that those dramas are receiving financial aid from companies as a condition of product placement deal. But the important issue here is that they used bibimbap made in China when bibimbap is Korea's own traditional dish.

K-dramas are now delivered to so many people around the world. This might mislead foreign viewers who are not familiar with Korea that bibimbap is Chinese food.


How Korea and Koreans should react to the issue?

Just expressing anger benefits nobody. Both Koreans and the Korean government should face the issue clearly and take action.

There is already convincing evidence that the Chinese government is involved in the recent claims over Korea's cultural heritage. Global Times, a nationalistic Chinese tabloid, in late November reported false news about kimchi. Not only that, Zhang Jun, Chinese ambassador to the United Nations, uploaded a photo of him holding up kimchi on his twitter account. The account was named as China government account. That's not an individual account but an account that has been used for promoting China and to publicize the country's diplomatic achievements to all over the world.

This shows that China's claims to Korea's cultural heritage are not only made by some Chinese netizens. It's quite certain that Chinese government is also making a move behind. In that sense, the Korean government should also make some movements against China.

While the government is fulfilling its duty, citizens like us should make efforts to stand against China's false claims and try harder to fix them. Promoting Korea and our culture to world is very important. We should try our best on our own to protect our culture and history.

Another possible method is exposing China's claims to the world. We should spread what China has been doing wrong to other countries and put the country under pressure about their behavior. When the efforts by both the Korean government and Koreans are made, we could finally take further action in solving the issue.

The recent originality issue reminded me how important education is. The deep-rooted sinocentrism comes from education. All Koreans know that kimchi and samgyetang are from Korea, but the recent issue delivers us new lessons that our careless attitude gives opportunities to other countries to take our cultural heritage. It's time for Korea to consider offering education to younger people on how to react to cultural provocations against our heritage. 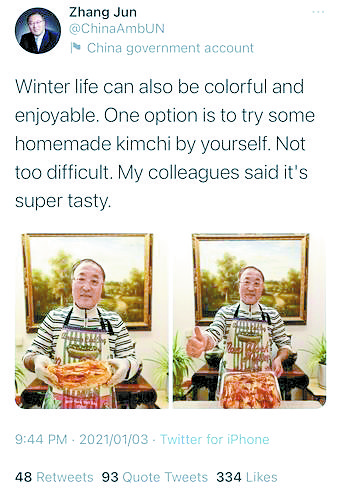 Zhang Jun, Chinese ambassador to the United Nations, uploaded a photo of him holding up kimchi on his twitter account, which was named as China government account. [SEO KYOUNG-DUK]


I assume you must have gone through a lot of struggles fighting Chinese people regarding the originality issue. What motivates you to continue your efforts?

Someone needs to do this, and I can be one of them. We can't remain indifferent when China keeps making cultural provocations. In case of Baidu, it's China's largest portal that hundreds of millions of Chinese people use to search information every day just like Korea's Naver. When Baidu has some false information on it, young people would believe those as true.

I believe the most critical way to handle the issue is facing and fighting against those false claims fair and square so that they can be fixed properly in the future. Of course, I've been receiving so much criticism and even curse words via emails and messages through social media, but I must continue.


You've inserted many full-page advertisements about Korea's cultural heritage in foreign newspapers. How come it was half-paged in size in the latest one?

A full-page ad was an option. But the reason why I decided to insert the half-page advertisement this time is because that is the reasonable size that allows many young people around the globe to share on their social media such as Instagram. The New York Times targets many international readers around the world. If it could've come as a full-page, it's difficult for them to save the image and share it via social media. We've also been continuously doing other activities to promote Korea using the advertising images through various media channels.


What factor do you put most emphasis on when you plan advertisements or campaigns?

Definitely timeliness. Promotion is very time sensitive. China has recently been making claims that kimchi originated from China, and that is the reason why I inserted kimchi advertisements in The New York Times.


What's your next chapter?

Of course, I will make efforts to correct the false cultural information that other countries make against Korea, as well as to promote our culture.

On top of that, I will escalate my efforts to not only raise awareness of Korean culture but also help them to enjoy the culture. Recognizing and enjoying are completely different. Let's say bibimbap has now become a very popular dish in a restaurant in United States. That's very important as well, but I will make constant efforts to help people in overseas countries to actually enjoy it so that they can actually cook bibimbap with their children and enjoy it at their homes.