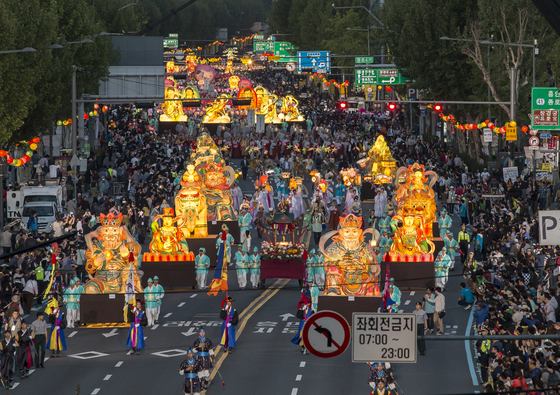 The annual lantern parade in downtown Seoul in 2017. [JOONGANG ILBO]


An annual lantern parade in downtown Seoul, which is considered to be the highlight of the Unesco-listed Yeondeunghoe (lantern lighting festival) in celebration of Buddha's birthday, has been canceled for the second consecutive year due to the Covid-19 pandemic.

The Jogye Order of Korean Buddhism said Saturday that it would not hold the lantern parade, which would have taken place on May 15, due to concerns over a resurgence in Covid-19 cases. The annual lantern parade, in which about 20,000 Buddhists carry colorful lotus-shaped lanterns, along with wagons carrying gigantic lanterns of diverse shapes, has been the main spectacle of the lantern festival.

This year’s Buddha's birthday, which is the eighth day of the fourth month of the Lunar calendar, falls on May 19. Instead of a large-scale parade, Buddhist temples will hold individual small-scale events celebrating Buddha's birthday.

"Yeondeunghoe: Lantern Lighting Festival in the Republic of Korea," was added to Unesco’s Intangible Cultural Heritage of Humanity List in 2020.