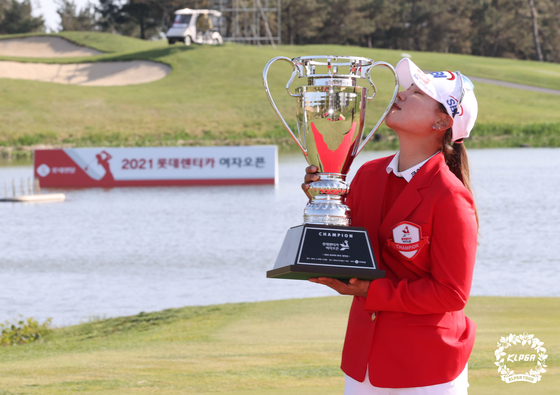 Lee So-mi kisses the trophy after claiming the win at the Lotte Rent-a-Car Ladies Open at Lotte Skyhill Country club on Jeju Island on Sunday. [KLPGA/YONHAP]


Lee So-mi won the Lotte Rent-a-Car Ladies Open at Lotte Skyhill Country Club on Jeju Island on Sunday, picking up the trophy at the first tournament of the 2021 KLPGA Tour.

By shooting even-par on the final day, Lee finished the tournament two shots ahead of the field at 282.

Golf courses on Jeju Island are known for being difficult due to strong winds and hard greens. Only the top three were able to score below 288 to go under-par for the entire tournament.

“Actually, I was so concentrated on the wind and myself that I was unaware that Jang and Lee had shot birdies while I shot a bogey,” Lee So-mi said.

Lee took a sole lead again with two birdies — an iron shot that landed just a meter (3.28 feet) away from the hole on the par-4 sixth and a seven-meter birdie putt on the par-4 seventh.

Jang was fighting Lee until the 16th hole, when a double bogey to Lee's par saw her fall back three shots. Lee hit a bogey on the par-3 17th but saved it with a par on the 18th to hold on to a two shot lead.

“Last winter training, I started extra early with my coach because it was my first time training in Korea during the winter," Lee said. "We focused on mind control and changing the way I think during the game.


“Today, I tried to play as I had practiced, to only think about my game and not worry about how others performed. I think that is how I won today.”

Despite the postponement of the 2020 KLPGA Tour season due to the coronavirus, the 2021 KLPGA Tour started smoothly, though the gallery was kept empty.


A total of 120 golfers started the tournament vying for the total prize pot of 700 million won. The field was cut down to the top 66 players after the first two rounds.


The KLPGA Tour will continue its season with the Nexen Saint Nine Masters 2021 at Gaya Country Club in Gimhae, South Gyeongsang from April 22 to 25.