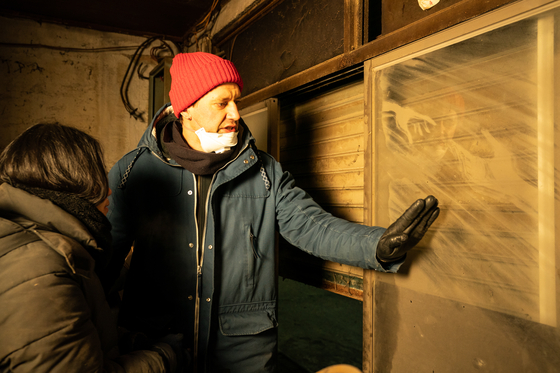 Nikita Golubev, the dust artist who drew several artworks that appear in the film "Dust-Man," on the set of the film in 2018. [THURSDAY MORNING]


In Moscow, Russia, a driver, if lucky, might come across an exquisitely detailed piece of art drawn on the back of their truck or the side of their car. But only those who've failed to clean their cars for some time are eligible for the guerilla artwork as the pieces are drawn into thick layers of dust and dirt.

The artist behind the dust works is Nikita Golubev, also known as Proboynick, whose work “Praying Hands” inspired director Kim Na-kyung to write the story for the film “Dust-Man.”

Golubev flew to Korea in December 2018 at the request of Kim, who asked that he create works to appear in the film. 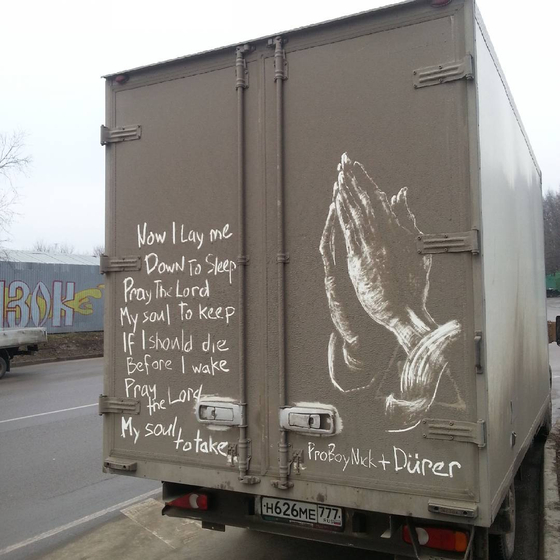 
“I accepted the invitation with pleasure,” Golubev said via an email interview with the Korea JoongAng Daily. “It was a nice chance to meet some new creative people who are on the same wave and to travel to Korea as I have never been there before.”

Golubev’s “Praying Hands” makes an appearance in the film, drawn by the character Tay-san. The artist says that it remains his favorite work in the film.

“I was lucky to make it really good, even better than I did it the first time in Moscow,” he said. “I got myself into the perfect vibe when I was creating it, and it came out really good, the way it should be. It was very symbolic for me that it was Christmas day when I was drawing it. I am not religious, but it was very significant for me that day.”

Because he was only in the country for less than a week he didn't have much time for sightseeing, but Golubev already has a favorite local dish — gimbap (seaweed rice roll). He hopes he can return one day and have a chance to enjoy the nature Korea has to offer.

In Russia, the artist has undertaken a variety of other commercial work such as book illustrations, mural paintings and wallpaper designs. However, drawing in dust is something Golubev does only for the creative element.

“I don’t get money for it but sometimes I get much more, for example when I met someone like Na-kyung and her awesome team,” he said.

The artist’s Instagram (@proboynick) is full of his dust art and videos of his process. Golubev says all it takes is finding a large, dirty canvas where he can spread his imagination, something he claims is pretty easy in Russia.

“I prefer trucks instead of small passenger cars,” he explained, adding white vehicles are the best to work on. “It is the perfect canvas for creating contrasting image with half tones and good details. But the dirt is always different — sometimes it’s wet, frozen, or it’s too thick. So the material isn’t always constant. There’s a lot of dust in Russia for many reasons, and in winter and spring when there’s a lot of snow or rain, [the dust] sticks to cars. So there’s plenty of canvas for me. I traveled all around the world and I’ve never seen anything like what we have here.”

When asked if he’d ever had a hard time letting go of his art, which is always driven away,  Golubev said that factor is the main reason he's attracted to dust art.

“I think the main thing that people like in dirty art is its conception of temporality,” he said. “But I also hope they like the messages that I am translating through my art. I’m trying to make my topics clear, so everyone in the world can understand them.

“The main idea [of its temporality] is to let it go and move forward to create something new,” Golubev said. “I do different art [such as] oil paintings and watercolors [too]. The dust art is created to remain only in photos. I knew this when I started it, so I don’t worry about that.”

The same goes for fixing his mistakes when creating dust art. Because it’s tough to fix mistakes in dust, the artist said he’s learned to accept it and move on.

“Because there’s always something imperfect,” he said. “I learned to finish my pieces however they go and to proceed to new ones.”

To try and avoid mistakes, the artist usually carefully plans his piece on paper before he takes his fingers to the dust.

“Sometimes it’s spontaneous but more often I’m making sketches, and they can wait for their time, [even] for months. Or if I feel that I need to make something new, then I go to sleep wishing to get an idea, and in the morning when I wake up I usually have one or two ideas. It usually works. With art you don’t always have to [be pressured] by time. It’s better to let it go.

“For me, art is something that is created with no particular reason for no practical use,” he said. “Something that just has to be created [...] Anything can be art, and no one can tell when something becomes art.”