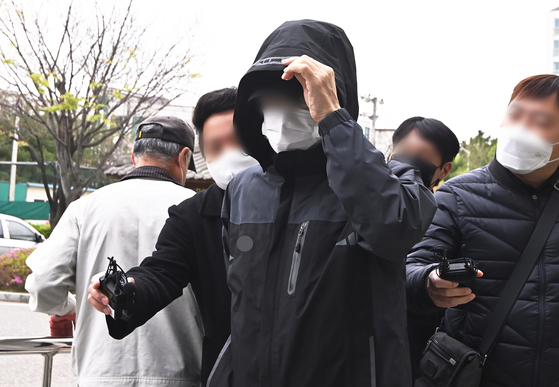 A Korea Land and Housing Corp. employee suspected of using inside information to buy land heads to his warrant review at the Ansan branch of the Suwon Regional Court in Gyeonggi on Monday. [NEWS1]


The National Police Agency's special task force, which is investigating real estate purchases made by public officials using inside information, said Monday it has arrested four employees of state-run companies and government bodies to date and obtained court confiscation orders on such illegally acquired assets.

“From now on, we will investigate all illegal activities related to real estate according to the law, without regard for rank,” said Yoo Jae-seong, a forensic investigation official at the National Investigative Headquarters, a division of the police agency directing the special task force.

“We will pursue stern legal punishment for public employees and civil servants who have engaged in illegal real estate activities and recover any profits gained from such activities through confiscations.”

Public attention has turned to illegal land purchases made by public officials and state-run company employees after civic groups raised allegations on March 2 that employees of the state-run Korea Land and Housing Corp. (LH) used inside information to buy land in the area of the Gwangmyeong-Siheung New Town development.

While an interagency team under the direction of the prime minister's office is running an inquiry into the real estate affairs of public officials, the police special task force is responsible for investigating suspects.

According to the special task force, the four arrested individuals include an official from the Pocheon city government, a former official of the Gyeonggi provincial government, an employee who worked at the Gumi and Gimcheon branches of the Korea Rural Community Corporation and an employee at LH’s North Jeolla Regional Headquarters.

The employee at LH’s North Jeolla Regional Headquarters is suspected of buying real estate in 2015 under his wife’s name in a designated development area in Wanju, North Jeolla, using inside information. He is the first to be arrested among current LH employees.

Real estate confiscated by the special task force includes land worth 8 billion won ($7.1 million), bought by the Pocheon city employee in the area of a planned rail station, and land worth 5.5 billion won, bought by the Gyeonggi provincial government employee around a planned semiconductor production complex in Yongin, Gyeonggi.

The special task force is currently investigating 746 individuals in relation to 178 suspected cases of real estate purchases made using inside information on planned development sites.

Apart from the four individuals already arrested, 47 of the 746 people under investigation have been taken into custody after they admitted to the accusations levied against them.

Of the 178 suspected cases, 20 were reported by civic groups and 12 through tip-offs. Eight cases were requests from the government’s inquiry team for further investigation, while the remaining 138 were initiated by the police itself.

Excluding 38 LH employees, 44 National Assembly and regional council representatives and 140 civil servants and state-run company employees are under investigation, conducted by either the task force or local police agencies.