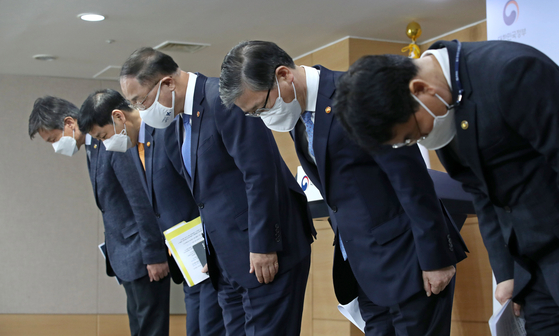 
Finance Minister Hong Nam-ki said on Sunday that the government will limit the selling or acquisition of a certain properties by key officials after he offered an apology for the scandal at the Korea Land and Housing Corp. (LH).

“[The government] will restrict land transactions to a certain degree targeting those at the government agencies and institutions handling land and housing development and require them to report private real estate investments, when needed,” Hong said.

He added that the government will not only disgorge ill-gotten gains from land investment but it will also assess punitive damages to discourage such abusive dealings.

The minister has yet to reveal the specifics about the future restrictions.

“I feel devastated to see an unsavory event taking place at a public institution that undertakes real estate policies, which is supposed to be fair and self-regulated,” Hong said.

Purchases were allegedly made of land on the site of a 70,000-unit New Town development announced by Land Ministry last month.

“To increase credibility of the investigation, a separate investigative team independent of the government should be formed,” they said in a joint statement, saying probes by an investigative agency or the Board of Audit and Inspection would be ideal.

The groups went on to note that other measures lack details.

“[The measures] are still vague, and [the government] should come up with a more specific and coordinated response,” the statement read, adding that an illicit deal based on insider information should be punished with prison terms and fines three to five times the profits gained from the dealings.

Last Wednesday, Byeon played down the possibility of the employees deliberately organizing the purchases to unfairly gain.

“It doesn’t appear that the employees acquired the land after knowing that the area will go under redevelopment,” he said, “It is rather they assumed that the area won’t be designated [as the new town] and went on to make the purchases.”

His comment was met with criticism and scorn, prompting the minister to offer a separate apology last Friday.

In the meantime, the Finance Minister will push ahead with the supply of public housing as planned while vowing to avoid questionable transactions.

The government announced last month a plan to supply 830,000 housing units by 2025. Of those, 243,000 units were to be supplied by constructing housing units on public land.