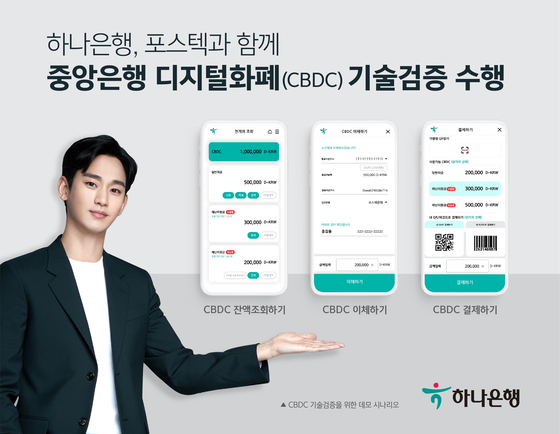 The image shows projected mock-ups of the central bank digital currency via Hana Bank's mobile application. The bank is testing digital currency-related technologies with a research center under the Pohang University of Science and Technology. [HANA BANK]

Hana Bank said Wednesday that it is testing technologies related to the central bank digital currency (CBDC) in development by the Bank of Korea jointly with a research center under the Pohang University of Science and Technology.

The bank aims to establish a pilot system that enables commercial banks to distribute the digital currency once the country's central bank issues the CBDC, by April, in cooperation with the Center for Cryptocurrency & Blockchain Research under the Pohang-based university.

The bank has been testing various scenarios to see whether the digital currency can be used like banknotes for both banks and customers.

The bank said in a statement that it will actively join a movement by global central banks issuing CBDCs.

Central banks globally are considering adopting digital currencies, inspired by cryptocurrencies like bitcoin, but different as cryptocurrencies are not issued by the state and lack the legal-tender status.