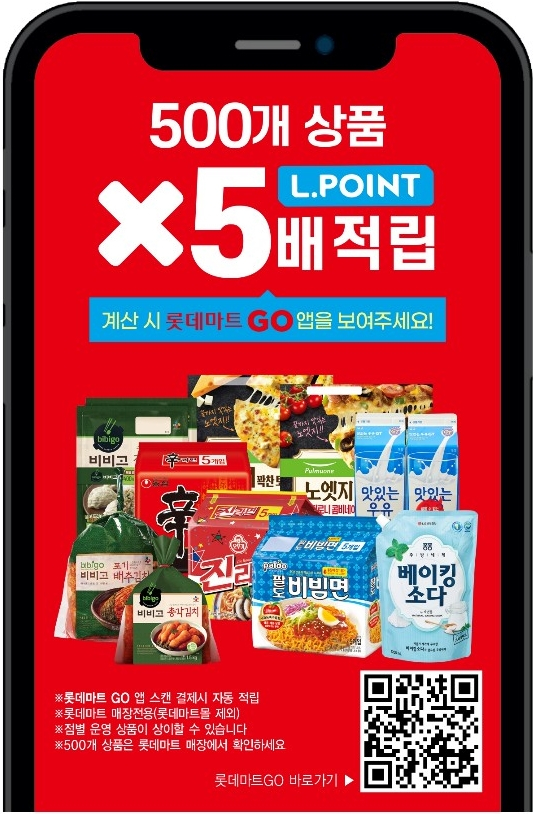 
Lotte Mart has jumped into a price war that has intensified since Coupang went public last month.

On Wednesday, Lotte Mart said it is “responding” to price cuts by Emart last week. It has gone a step further than its rival by raising loyalty program points for each purchase.

In response, Lotte Mart said it is offering the same prices as Emart starting Thursday. It is also multiplying the "Lotte points" awarded for purchases by a factor of five.

The points can be spent in Lotte Mart and other Lotte outlets like Lotte Department Store.

“The recent promotion can be said to have been based on a desperation to prevent the [retail] market being stolen by online shopping,” said Lee Chang-kyun, a spokesperson for Lotte Shopping.

He added that the retail market has expanded with the entrance of e-commerce players, and that traditional retailers have to follow what consumers like in e-commerce operators: comparing prices and landing the lowest prices.

Lotte Mart “hopes the promotion becomes an opportunity for people to shop without being concerned about prices,” said a spokesperson for the company in a statement.

Earlier this week, Market Kurly promised to offer the lowest prices on 60 types of food, including vegetables, fruits and meat. It said it will expand the categories in the next few months. It is also offering 10 sets of products, like barbecue ribs, for 100 won ($0.09).

Coupang triggered the recent price war. Earlier this month, it started free delivery for all orders regardless of the size or customer’s membership status.

“Competition between online and offline retailers will grow fiercer from the expansion of contactless consumption,” according to a research report from IBK Securities.

Sales of traditional retailers last year declined 3.6 percent on year, while online sales rose 18.4 percent, according to a report from the Ministry of Trade, Industry and Energy.