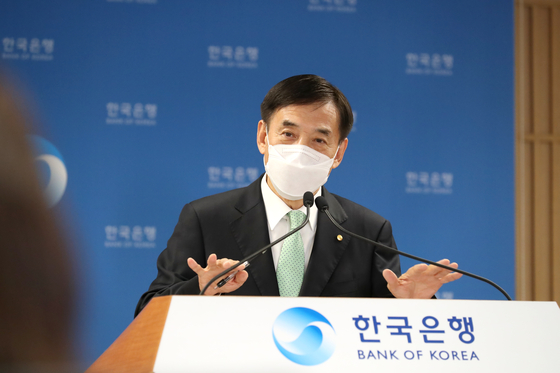 Bank of Korea Gov. Lee Ju-yeol speaks during an online press briefing held Thursday after the monetary policy board of the central bank decided to maintain the country's key interest rate at 0.5 percent. [BANK OF KOREA]

Korea’s central bank predicted the country’s economy will grow more than 3 percent this year, slightly higher than a forecast made in February.

The Bank of Korea (BOK) had projected 3 percent growth at that time.

“We are positive that [Korea’s] economic growth rate will reach the mid-3 percent level this year considering recent recovery in both the global and local economies in the first few months of this year,” said BOK Gov. Lee Ju-yeol during an online press briefing held Thursday.

“A massive economic stimulus package in the United States has speeded up recovery of the global economy and boosted IT trade," he said, "expanding growth of Korea’s exports and infrastructure investment.”

The central bank’s projection aligns with others by international organizations.

The International Monetary Fund last month raised its projection for Korea’s economic growth this year to 3.6 percent from 3.1 percent predicted in January. The Organization for Economic Cooperation and Development (OECD) raised its projection to 3.3 percent last month, up 0.5 percentage points from a forecast made last December.

Despite expectations for recovery of the country’s economy, the monetary policy board of the BOK still decided to maintain the country’s key interest rate at a record low of 0.5 percent, citing remaining uncertainties related to the coronavirus pandemic. It was a unanimous decision by board members, according to the central bank.

The rate has been at that record low rate since last May.

Last year the BOK board lowered the base rate twice – in March to 0.75 percent and in May to 0.5 percent – as the Covid-19 started pulling down the economy.

In a written statement to reporters last month, Lee had said that while there were inflationary forces evident in the market, as oil prices pick up and exports recover, it is still too early to raise interest rates due to uncertainties related to Covid-19.

“We believe it is yet necessary for the bank to keep an accommodative monetary policy until we are sure the economic recovery in Korea is here to stay,” Lee said.

Lee also expressed his views on a recent boom in cryptocurrency.

“I have said cryptocurrencies like bitcoin don't actually have underlying value and there are many limitations for them to be used as a payment medium and my views have not changed,” Lee said.

He added that as it is very difficult to set appropriate prices on crypto assets, their prices have been highly volatile and this could mean risks to a country’s financial stability because investments in these assets could end up as bad debt.